The word looks so innocent sitting there, doesn’t it? Friendly. Downright perky. Update! It promises something new and fun. 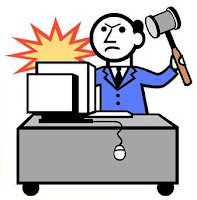 And it strikes terror into the hearts of everyone who has a Facebook account, with the possible exception of Beast (public figure), Mark Zuckerberg’s dog. I’ve been on Facebook a little over a year, and I’m still learning how to use it because they keep updating it.

I started out with my identity stated clearly on my Facebook page: Author of the Rachel Goddard mysteries (titles following). In the latest update, my identity vanished. I was able to dig down a couple of layers and add it again, but how many readers will go searching for it? Most authors on FB are there not because they have loads of free time to play online [pause while every working writer reading this rolls on the floor laughing/crying hysterically] but because it’s one more way to promote themselves and their work. Facebook’s update made it harder for anyone to learn that a particular person is a writer, and what kind of books he/she writes, and what the titles are. We’re spending a lot of our time there trying to figure out how to use new features and where to find material that suddenly disappeared in the latest update.

And the look of the site. Oy. Can we all spell u-g-l-y? I’m not sure FB’s operators can, or that they can define it. Customization is virtually impossible to achieve on FB. (Yes, I meant to use the word virtually.) Everybody’s page is just as clunky and utilitarian as everybody else’s. This, I suppose, is fair. It’s also annoying. What would be wrong with a little individuality? Would it make the server crash if half a billion people tried to tart up their pages at the same time? Probably. But a choice of templates, perhaps – would that be so much to ask? Maybe, considering that FB is free to users in exchange for being bombarded in subtle and not so subtle ways by ads. Free or not, though, we think of our Facebook pages as ours.

There’s the source of the problem: We get a lot of free space online, we use it every day, and we start feeling we should have some say in how it looks and works. We don’t. The owners have a right to “update” their sites and we retain only the privilege of saying Enough! I’m outta here.

Blogger, where Poe’s Deadly Daughters is published, has also been on an update kick over the past year or so. I like some of the changes, especially the Preview function – when it works. The new picture uploader, not so much. And I hate it when I hit the Enter key and suddenly find myself at the bottom of the blog post I’m trying to edit.

While I’m on the topic of updates, have you tried yet to use Microsoft Word 2010? If you’ve figured it out, please share your wisdom with me. I love Windows 7 – that was an update worth making and worth using – but Word is hostile territory to someone with my limited word processing needs. Ribbons within ribbons within ribbons. Hidden menus. Features that nobody knows about until they accidentally enable one and chaos breaks out in a data file.

Deliver me from the relentless stream of updates. Please. Or at least tell me where to get a brain update with an enhanced patience component.

What “update” has made your life more difficult lately? Which one has turned out to be an improvement?
Posted by Sandra Parshall at 3:00 AM

On applications such as facebook, which are continuously evolving, there isn't much we can do to relieve the frustration.

But, I don't buy new software, such as Word 2010, immediately. Software manufacturers are famous for releasing Beta software. Oh they claim that it's not Beta, but buy it immediately and there's 50 million updates. Why? Because they rushed it onto the market to recoup their investment, make profits before their time, use us a test subjects and annoy us unmercifully on software that hasn't yet been perfected.

The trouble is that you develop software incompatibility if you stick with something old. You may want a new program of some kind, but it won't work with your old OS. Or you have a new OS and your old software won't work with it. Some of Microsoft's own products are not compatible with each other.

The latest changes on Facebook don't make sense to me. They seem to be trying to *prevent* people from networking.

I guess updates are just a symptom of the rapid-fire changes happening in all things technological.

But I'm with you--they ARE annoying, and I too preferred the previous Facebook page. This one is confusing.