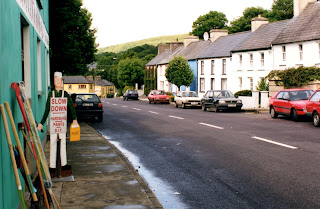 If all goes as planned, when you read this I will be in County Cork, Ireland, where my grandfather was born, doing research for a new and yet unnamed mystery series.  I shrewdly set most of the series in a small pub in a small town, so much of this research will consist of sitting in pubs and listening to people talk--how they sound, and what they talk about.  I hope some of them will even talk to me, and if I've very lucky, I'll persuade a pub owner to show me how things work (like how to pull a proper pint of Guinness).

But the problem with traveling these days is keeping in touch with the cyberworld.  I'll be gone for two weeks, and in that time my email inbox will fill to overflowing, and my provider will send me nasty messages and simply jettison anything else that comes in.  Not good.

I remember the first time I left the country.  I was all of 21, and my mother was convinced she'd never see me again.  She made me promise to send her a telegram from the airport to let her know I'd landed safely.  I did, but the country's telegraph workers were on strike at the time, so she got the telegram a couple of weeks later.  (I was a starving student, so placing a phone call was out of the question.) 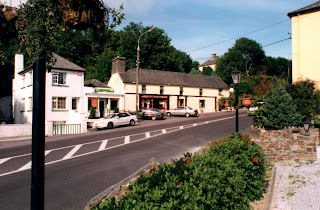 Fast forward a decade or two, and the Internet had blossomed everywhere.  The trick was to find a place with a terminal you could afford.  I tend to travel to out-of-the-way places, so I can't rely on the generosity of large hotels.  As a result, I have logged on to machines in places like a converted 18th-century gaol (Ireland again) and a couple of public libraries.  About the same time, disposable cell phones made their debut, so you could pick one up in the airport and at least be able to communicate within a country (no, my own won't work in Ireland--I did check).  I gather now that finding a working pay phone anywhere in the world is becoming increasingly unlikely--everyone has a cell phone.  Guess what:  I've "rented" a cell phone from my regular provider, and I don't even have to change the number (which is good because heaven help me if I have to remember one more number for anything).

But that's still not Internet access.  Why does it matter?  Recently one of my colleagues on this blog described how we get an endorphin rush from receiving emails.  Maybe we used to get the same feeling from a personal letter--remember those?--but emails are constant and immediate. We're hooked.

As writers we follow a lot of loops and blogs.  As a baseline we use them for support--we writers are often solitary souls, and we need someone out there who understands and who will assure us that we aren't crazy, and we'll work out that plot point and make that deadline, and some wonderful publisher will have faith in you and buy it.  And so on.  The problem is, there are a lot of writers, and they're all needy.  So that means a lot of emails, even if you're on digest.

I'll be gone two weeks.  How will I survive without my daily, even hourly, dose of emails?  What important events and announcements will I miss?  Will anyone miss me?  Trust me, I've already checked out the free WiFi location closest to where I'm staying (which is a charming cottage with views, a hot tub, DVD player--but no Internet!), and plan to have some long lunches in their restaurant, trying to keep ahead of the rising tide.

But this is as close to a vacation as I've come in the past five years.  For my husband (who has graciously agreed to accompany me), it's been even longer. We're looking forward to some down time. I've been to Ireland more than once, and I know that the pace of things is simply slower there.  In my experience, outside of the cities it's a very soothing place, perfect for restoring mental equilibrium and regaining a more balanced perspective.

And I'll come back to a thousand emails.  But maybe by then I won't care.

How long can you survive without the Internet?
Posted by Sheila Connolly at 12:14 AM

I like your kind of research. I hope you get all that you need. Also, have a great vacation.

About those conversations in the country pub: I'm wondering if you'll understand what people are saying. ;)

Looking forward to hearing all about your research travels when you return. Ireland is a magical place. I found the people wonderfully kind and friendly.

When I went to Kenya a few years ago, I found internet cafes on just about every corner of Nairobi. They were cheap and had good access. Out in the country, though, electricity was iffy, and connectivity was nonexistent. Everyone, however, and I mean everyone, had a cell phone. The cop directing traffic was chatting away, and even -- I kid you not! -- the woman begging on the sidewalk was talking on her cell phone. As internet connectivity goes even more mobile, I think connectivity issues will be a quaint thing of the past.