This week Borders officially filed for bankruptcy, to no one’s great surprise, claiming debts well in access of a billion dollars and owing money to a lot of publishers. They plan to close 200 of their 642 stores. Lo, how the mighty are fallen!


As both writers and readers, we live in interesting times. When I was young (in another millennium), my mother and my grandmother were avid readers, although they leaned toward historical fiction, mainly featuring royalty. But there were always books around the house, including a few that I probably wasn't meant to find, much less read.

My grandmother, widowed and keeping company with a gentleman friend, regarded a stroll to Doubleday's in Manhattan as a pleasant after-dinner excursion, and usually came home with a new hardcover, which she was likely to pass on to my mother. In the suburbs, we made occasional forays to Brentano's at the shiny new mall that opened up in the 1960s. As a less satisfying alternative, the all-purpose store in the middle of town that sold primarily gifts and cards and candy and newspapers, had a couple of racks of paperbacks, right up front in the store. When I was in middle school, Scholastic Books would show up every few weeks and set up racks of books, most of which cost about thirty-five cents, and I still have some of them. So there were always books in my life.

Now we're living in the midst of an electronic revolution, watching the shift from physical books to digital ones. Kindle, Nook and their brethren are multiplying like mushrooms, and their share of the market is growing by leaps and bounds. Publishers are struggling to revise contracts to include language that reflects what they know right now and what they think might happen over the life of the contract. Writers are taking back electronic rights and posting their own books, both out-of-print and never-published, as digital books, and reaping the benefits directly.


We've seen closings of long-treasured and well-respected independent bookstores over the last couple of years, because the owners just couldn't afford to stay open. And now we're seeing the implosion of the giants. Is there any business model for selling books that works? I know I wouldn't want to be a bookseller now, no matter how much I love books. 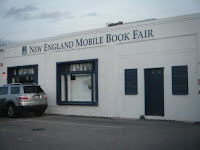 I have an unusual perspective, because my daughter works at a place that bills itself as the largest independent bookstore in New England. It's a great place, with thousands and thousands of books on shelve 10 feet high, and I'm there a lot. But it's been run by the same family since its founding over 50 years ago, and the current generation just isn't that interested any more. They want to sell the store--but what they're selling is the stock, the name, and the goodwill. The family wants to hold on to ownership of the land and the building (in a prime location), although they would offer any buyer advantageous rates for a long-term lease. It's been on the market since last fall, but so far no takers. Will there be? Should there be? How do you place a value on goodwill in this day and age? They had a sale over the past couple of weeks, and the sizeable parking lot was filled with people jockeying for any open spacesBbut I've also been there on days when it was all but empty. They have a loyal following and great name recognitionBbut is that enough to keep the store in business?


At the same time, libraries are struggling to hold a small slice of municipal budgets, cutting staff, hours, and acquisitions. How can we stand to lose both bookstores and libraries?


Any reader among you knows that reading is an addiction. We can't survive without words in front of us. I've been known to read decades-old magazines I found stuffed under chair cushions in rustic vacation cottages when all else failed. Cereal boxes. Operating manuals. We need our fix, and we need it regularly.


Are pixels on a screen the same? They're still the same words, put together by the same people, only in a form that is infinitely more portable and adjustable. And you'll never run out of books, as long as you're near a computer or a wireless connection. All that is good. But what we lose is the serendipity of browsing: the pleasure of wandering through well-stocked aisles, picking up whatever appeals to us for any number of reasons, leafing through the pages, and deciding to give it a try. Will that change how we all read?


Will Borders survive? It’s not clear at the moment. But its woes have sent a seismic ripple through the publishing and reading world.  Where will you turn for your books now?

Bookstores are the closest thing to Heaven on earth. I get lost in them whenever I can. I don't remember too many Borders in my area. However we did have Waldenbooks and Hastings. Both have gone out of business. Barnes & Noble - where my brother works - is now the primary bookstore with two local stores and no real competition.

We lost our Borders a year or so ago and I miss the store. Still have a BAM. I also have a Kindle and enjoy the ease of getting books any time of the day or night, but I still love hard copy! We need both but I don't see how both will survive in today's world. When I've done signings I was shocked and saddened by the number of people who assured me they don't read. Sigh.

I remember Brentano's. I remember Crown (which was headquartered here in the DC area). I remember Waldenbooks. I'm afraid it won't be long before Borders is just a memory. I did some very successful signings at Borders stores with my first two books, but with the third everything had changed. We have a BAM in our little suburban DC village (in the space that once belonged to Crown), and a huge B&N down the road, but I am very sorry to see Borders failing.