by Sheila Connolly
(Hey, you're supposed to be having a lovely time celebrating with family and friends–what are you doing here? But thanks for stopping by.)


Once upon a time, Christmas was a religious holiday. That didn't mean a lot to me when I was growing up. I had a rather sketchy religious upbringing: my father was Catholic, my mother a nominal Episcopalian, and nobody attended any services (they were married in both churches, to keep his parents happy). Neither was very concerned about passing on their convictions, such as they were, to my sister and me. In my formative early years, I attended a Quaker school, which muddled things even more. So I never had the Sunday school, drag-to-early-service experience. 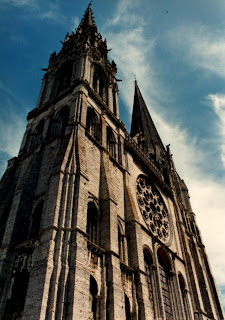 Which makes it all the more odd that in graduate school I found myself studying medieval art history, and that meant churches. Not just any churches, but the grand cathedrals of Europe, where the builders strove to reach the sky, dissolve the walls, and fill the soaring space with literal and figurative light. Or if you want to take an opposing view, the rich patrons sought to erect large and ostentatious monuments in order to impress their friends and foes and buy their way into heaven. Whatever the impetus, the results are undeniably magnificent.


In any case, I have probably been in more Catholic churches in my life than most Catholics, from St. Peter's in Rome on down to the tiny "chapel of ease" where my Irish great-grandparents worshipped.


Obviously for me Christmas was a largely secular holiday, distinguished by presents and food. My parents and my grandmother were indulgent, so there were many presents. There was also much food, as my grandmother would arrive from New York bearing baskets of absurdly large fruits, bags of nuts in the shell, packages of dried dates, and of course, cookies and candies. It seems quaint now, when foods from all over the globe are available in local supermarkets, but back then it was a big deal.


For my husband and me, most of our families are gone now, and our siblings live in states sufficiently distant that it's not easy to get together. Every year I honor my own family holiday history by retrieving the tarnished blown-glass ornaments from the attic and hanging them on the tree, reminding myself of where they came from and when I first remember them. My husband brought none with him to the marriage, and can't even remember any family tree traditions, although of course we've added plenty since we've been together. I even cherish the plastic Joe Montana that my sister sent me one year (we lived in the Bay Area during the 49ers' glory years).


Even though I may not call myself religious, I still feel a compulsion to celebrate something at this time of year. Whatever organized religion may tell us, December is still the time of the solstice, when the days begin, imperceptibly, to grow longer again. I've been lucky to visit Stonehenge and a number of other stone circles, large and small, and it's humbling that those ancient, pre-literate cultures knew that there was something magical about the solstice, and built their own monuments to celebrate it. Organized religion just borrowed from them.


We believe that the sun will return, crops will grow, and life will go on. That's worth celebrating no matter what you label it. Happy holidays, whatever you choose to call them! 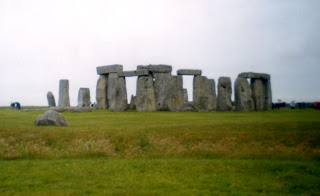