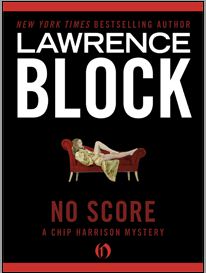 No Score is the first of four novels featuring Chip Harrison, and they all bore the lead character’s byline when they first appeared as paperbacks from Gold Medal Books. The working title of No Score was The Lecher in the Rye, which sums it up well enough; it’s a picaresque account of a young man’s desperate attempt to become sexually experienced.Gold Medal did very well with the book, and a couple of years later I wrote a sequel. And, because I liked the voice, I wanted to write a third book, but how many times could one lad lose his virginity? So in the third book I put him to work for a private detective, and books three and four are mysteries and could be called Nero Wolfe pastiches.In 1984 The Countryman Press reprinted No Score and Chip Harrison Scores Again in a double volume and asked the ideal person to write an afterword:Some Afterthoughtsby Hilton Crofield

I don’t know why they asked me to write this. Somebody’s original brilliant idea was for me to write an introduction to the new edition of No Score and Chip Harrison Scores Again, and I said OK. Don’t ask me why. Then somebody else got the bright idea of calling the double volume Introducing Chip Harrison, which meant that I would be saddled with the job of introducing Introducing Chip Harrison, and I said that, if you really want to know, I’d rather go into the bathroom and squeeze a pimple. So they said OK, we’ll make it an afterword, and I said OK again. Don’t ask me why. It’s not as if I was getting paid for this.
Chip Harrison needs no introduction, and I don’t suppose he needs an afterword either, so you can stop reading right now . . . If you’re still with me, I just want to tell you that these are my kind of books. Chip Harrison is a sort of a lecher on the wry side. More than that, when you finish the book you want to call him up and talk about it.
Listen, I’ve got a tip for you. Don’t do it. Years ago I wrote a book and said how sometimes I wanted to call the author in the middle of the night, and this guy named Ottinger had his name down as author and so many weird kids called him up in the middle of the night that the poor guy lost it. He went up to Maine or Vermont and quit writing and only leaves his house once a year. He always sees his shadow, and it's always six more weeks of winter.
I wouldn't want that to happen to Chip Harrison. I've already read the rest of the books, and I know that Chip went to work for Leo Haig and takes care of tropical fish when he’s not helping Haig solve crimes. If you haven’t read those books, go out and get them right now instead of wasting your time reading this crap I have to write.
Anyway, I like old Chip. I think Phoebe would like him, too. And I hope you liked him, but if you didn’t, well, tough. What do you expect me to do about it, anyway?
Oh, yeah. The business about the name. Lawrence Block is now listed as the author of the Chip Harrison books. They had Chip’s name as author originally, but now they’re supposed to be by this Lawrence Block. Same as my book is supposed to be by old Ottinger.
Well, I don’t have to believe that if I don’t want to. And neither do you.
(Hilton Crofield, “Some Afterthoughts,” afterword to Introducing Chip Harrison, by Lawrence Block, The Countrymen Press, 1984)That’s what Hilton Crofield has to say, and I wouldn’t attempt to improve on it. If you’ve enjoyed No Score, you’ll very likely have a good time with Chip Harrison Scores Again, and may then wend your way through Make Out with Murder and The Topless Tulip Caper. If you didn’t much care for No Score, well, you probably won’t like the others, either. But I don’t want to talk you out of anything. Best to buy them anyway, just to be on the safe side.Lawrence Block has published more than 100 books, including four bestselling series, as well as dozens of short stories, articles, and books on writing. He has received many awards in the U.S. and abroad and was named a Grand Master by Mystery Writers of America. For more information visit his website. He welcomes e-mails at lawbloc@gmail.com.

Very funny post, especially if you're old enough to have read Catcher in the Rye. But if you're not, you probably don't read Poe's Deadly Daughters either. [joke]

Catcher in the Rye still seems topical to me. I guess the basic nature of teenagers never changes. Larry Block's mimicry of Salinger's style is perfect, and hilarious.

Great guest post. By the way, Lawrence Block just released a slew of novels at Amazon for Kindle.