James Patterson’s books are everywhere. It’s said that one out of every seventeen books sold in America for the past three years has been a Patterson book. As the person who introduced him as the speaker at the last meeting of Mystery Writers of America’s New York chapter said, his sales equal those of Stephen King, John Grisham, and Dan Brown combined. 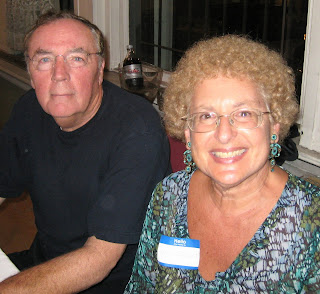 The only apparent catch in Patterson’s candidacy for the title of most successful writer is the fact that other writers collaborate on many of his books. So is Patterson really a writer? After hearing him speak about his process, I say yes.

First, he writes every day, often all day. He still gets up at 5 AM to do it, as he did when he had a high-level day job at a major advertising agency. Second, he’s an Edgar winner, taking Best First Novel in 1977 at the age of 26. Third, after his coauthor on any book has made his or her contribution by writing to his outline, Patterson himself does draft after draft—as many as seven—reworking it so each scene does exactly what he wants it to, without further reference to the collaborator. I call that writing.

As Patterson pointed out, team writing is not a new concept. Screenwriters do it, and so do advertising copywriters. There’s storytelling, and then there’s craft. (He said it, and I agree: I’m pretty sure I’ve blogged about storytelling, craft, and characterization as the “three-legged stool” that supports a novel.) Patterson is a prolific and gifted storyteller. It’s not that he has no talent for craft (“Edgar!” he reminded us with a smile), but he admits he’s less interested in craft than in storytelling. He chooses collaborators whom he considers better stylists than he is. It doesn’t stop him from rewriting dialogue and all the rest over and over until he feels he’s got it right.

Patterson is a big advocate for getting kids to read. He has a website, Read Kiddo Read, that steers parents, teachers, and librarians to books that he believes are such good reads that kids will love them and want more, eventually becoming readers for life. When asked what he thinks about the future of e-readers, he said, “It’s a done deal.” He went on to say that it doesn’t matter in what form readers read their books, but that the shift to reading on screen leaves him deeply concerned about the future of bookstores.

One might think that Patterson’s publishers pour a fortune into promoting his books. Not so. He does all the promotion himself. He works with an agency, but he’s the client and has the control as well as footing the bill. That way, he can make sure he gets it right. He said he probably loses money on a book by book basis, but overall, it’s worth it.

Patterson made it clear that he’s not taking any shortcuts or cynically writing to the market. Like the rest of us, on every book, he’s doing the best he can.
Posted by Elizabeth Zelvin at 3:00 AM

Patterson is indeed a master storyteller, and that's the secret of his phenomenal success. Less successful writers would do well to stop complaining about how much money he makes and look at how he employs the basics of storytelling.

So tell me, did any of it rub off on you? You were sitting so close!

Sheila, I've mastered the art of saying, "Can I have a photo op?" Writing a bestseller is harder. ;)

I met Patterson WAY back when he was touring with one of the early Alex Cross books and have been a fan ever since-though I have abandoned the Cross series. It was clear he loved what he did and loved the fans who read his books. I read one of the lastest collaborations earlier this month-The Postcard Killers and could not put it down.
A lot of people on the various lists really diss him, but why? He has managed to develop a busniess from his writing by working hard at all levels. Are people mad because he figured out how to market his stuff?

Very interesting article, Liz. I believe much of the criticism comes down to jealousy. It's so easy to hammer away at writers like Patterson or Grisham, but they write damn good stories. Let's not forget that some of the writers fortunate enough to write with Patterson and, previously, Robert Ludlum, go on to successful careers of their own.

Yes, Caryn. I think people are mad because Patterson does such a good job marketing his books. There is some jealousy out there that comes across as whiny - why does he have all the luck and readers?

I haven't read Patterson in quite a while, but when my husband was alive, he was always quite happy to sit down with one of his books, no matter who the co-author was. Jim wanted a good story, and knew he'd get it from Patterson. I just tend to read more mysteries than thrillers.

I think it's more than jealousy. For some, it's the mistaken impression that the books are ghost written. It's now clear to me that that is not the case. Let's give credit to the co-writers, too. :) On The Postcard Killers, that was Swedish writer Liza Marklund, whose own books (if I remember what Patterson said correctly), sell 500,000 copies in a country with a population of only 8 million.

As some of us have been saying for a long time, it's the end result that matters, not the process.

My daughter reads him faithfully. She maintains he grabs her on the first page and holds her to then end.
I don't care for his books but that's just a personal preference. There's something out there for everyone. How sad if we all only read the same books.
Patterson is definitely a master of marketing. A highly intelligent man for sure.

Really interesting, Liz! I agree -- story-telling is the key.

Thanks for a great article! It's interesting to find out that he's in charge of his own promotion. Given his advertising background it makes sense and probably explains those fun television commercials of his.

I just wonder how I can get to be one of his collaborators. I wouldn't complain at all about him re-writing my stuff as long as my name went on the cover along with his.

I read his Lindsey Boxer series with the murder club, and although I don't think the recent ones have been quite as engaging as the first couple in the series- which often seems to be the case with series- they are still better than many of the other mystery series out there.

Every pass can't be a touchdown.

Holli, of course your question was asked at the talk at MWA. Patterson is like Oprah: HE has to ask YOU. :)

Holli, of course your question was asked at the talk at MWA. Patterson is like Oprah: HE has to ask YOU. :)