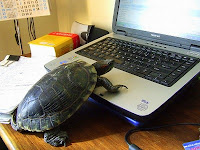 A couple of weeks ago I was ready to throw my laptop at a wall. It was doing everything v..e..r..y.....s..l..o..w..l..y, from booting up to shutting down, and everything in between. Okay, it's three years old--not exactly new, but not ancient either. Having overloaded computers in the past with non-essential programs, I've been careful in choosing what to download to this one, so there was plenty of disk space available. I had even added RAM, a year or so after I bought it. So why was it dragging its figurative heels?

I did everything a semi-intelligent computer owner should. I defragged. I ran Check Disk. I dumped my recycle bin and cleared my temporary files. I ran scans up one side and down the other, for all those evil invaders that might have crept in from cyberspace. Didn't make a bit of difference.

I was getting desperate. I mean, I couldn't even log on to Facebook for more than a few minutes. It was freezing when I wanted to add more than a few friends. Who was this piece of machinery to dictate who my friends should be?

So finally, at the end of my patience, I contacted the Geek Squad. No, this is not a paid endorsement. But I've used them before, for a variety of computer problems, including the total meltdown of my daughter's hard drive. They have always been up front about what they can and cannot do, and they deliver on their promises. So what the heck? I needed help.

There's a physical Geek Squad near here, but being lazy/thrifty/impatient, I logged onto their website and contacted a real live person. At least I think he was live, but who can tell these days? He said his name was Jason. Sure. But I'll call you anything you want, as long as you can speed up my computer. Please.

I gave him (gulp) permission to peer into the inner working of the laptop, remotely. Good thing I hid that international money-laundering scheme on a different computer. Oops, never mind. He poked and prodded, and came back with this evaluation: there's nothing actually wrong with the computer, but apparently my assorted virus protections (all recommended by various knowledgeable people, including a U.S. government IT employee) were warring with each other, making it increasingly difficult for anything to open, much less operate. The cure? Let the Geek Squad run their basic clean-up program. Could it make anything worse? I pulled out my credit card and said "go."

And then came the fascinating part. Someone, somewhere took over control of my computer. I know, we've all seen this in numerous movies and television shows. But I'd never seen it on my computer. The cursor darted; windows opened and shut. Decisions were made. Software was removed and installed. All this happened very fast--faster than any human could work? Was Jason human? Heck, for all I know he was working on four different computers at once. Or eating lunch at the same time.

The whole process still took three hours, even with Jason performing at warp speed. I could do nothing but sit and marvel. In the end the machine was purged and polished--and it works a whole lot better now.

But as I watched this happen, I had to remember that I grew up in a pre-computer world. When I was in high school, we took a field trip to Bell Labs in New Jersey, where we were awed by their cutting-edge technology. I took the first "computer science" class my high school offeredBand there wasn't even a computer at the school, so we had to travel to a nearby college to spend a couple of hours a week, mostly waiting for our turn to use the keypunch machine, and if we were lucky, to get one run of our program. The "textbook" was a mimographed copy, unbound (and I still have it, an antique now).

And here I was whining that my home computer is a little sluggish accessing a few million people and websites. What a world we live in!
Posted by Sheila Connolly at 3:00 AM

Amazing the benefits of this tech age but I gotta admit it can be a little intimidating.

You have my sympathy! It's amazing how quickly we've come to depend on our computers and expect them to perform magic at light speed. I remember our TRS-80 (Trash 80 to some). It used tiny little cassettes for storage, I had to polish the gold connectors with an eraser daily, and work vanished with every clap of thunder during storms. I thought it was wonderful.

Technology is so amazing and it's scary because we know that the computers we play with now, willbe obsolete.

BTW, did he tell you what he did to fix your computer?

I always say, technology is an amazing and wonderful thing - when it works. I can't believe how far we come in such a short time. However, think about just how much we are depending on computers now and it gets a little scary. I went into Sam's Club last week and they could only take cash and check (handwritten) because their satellite was down and it was effecting all of their stores worldwide. WOW

Keypunch cards! I'd forgotten about those.

My clever son in law has told me that if I reinstall my operating system, I can expect to see faster performance. My Apple is three years old, so it's time for a new one, but I'll try anything to milk a few more months out of it

One troubling aspect of having a computer, as least for us non-tech types, is trying to coordinate what programs you have. That was the biggest problem with mine: all the protective programs, each of which might be wonderful alone, were fighting with each other (sibling rivalry?). Jason the Geek deleted them and installed one free program that covered all the bases, and voila (I hate to say it, but it was a Microsoft product)!

We can't just assume that we can download whatever sounds good, no matter how much disk space we may have available. But how are we supposed to know what will work?

And it's startling that these machines become obsolete so quickly. Hard to keep up!

I could relate to your frustration, but a couple of the things that surprised you didn't surprise me. One, I've had my computer "taken over" at various times by both my webmaster and service techs. And two, a lot of parents have been naming their kids Jason for the past forty years. Paul, the catch if you reinstall your operating system is that it'll lose all your accumulated files. Backing up EVERYTHING well enough to get it back afterward is a daunting task. It's the only thing left to try (geeks who make house calls having said they can't find anything wrong that hasn't been fixed) to speed up the sluggish Word program on my 2003 Dell, and I haven't had the guts to do it.

I installed the new MS Outlook mail program recently (because Eudora, which I've used for many years but which is no longer sold or supported, is dying in pieces), and I had to turn to Verizon to persuade it to connect. The Verizon rep "took over" my computer to do it. Somebody at Dell did this once too. Both my problems were solved in mere minutes. I keep reminding myself that my very first computer (IBM PC in the early 1980s) didn't even have a hard drive, so I'm better off, no matter what.

Back when I was a programmer, one of my jobs was telecommuting 1-2 days a week (the best ones were telecommuting full time!). We always left our computers at the office on and did our remote work by taking over the computer at our work desk from home. It was so fun to watch other people's screens just working away with no one there! Glad you got fixed up, Sandy!

Notes Along the Way with Mary Montague Sikes said...

I'm happy my husband is so computer savvy he can usually fix anything or at least find out what to do. My problem now is that while away on various trips this summer, I managed to accumulate 18,500 e-mails in my Inbox. This is really slowing down my computer, but I don't want to do any mass deletion for fear of losing something important. Since about 200 e-mails a day come in, I'm not doing a good job solving this problem. Any one else have a similar situation?

Great post--and a fascinating one. We are computer immigrants; it is our children who are the natives.

Great post --I've been having the same problem. Time to call in the Geek Squad.