THE ZEN AND THE ART OF ICE CREAM 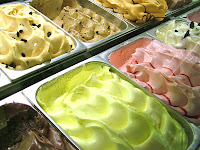 Since we launched Killer Characters--where cozy mystery characters get to blog in their own words--our characters have really come to life. Recently, we uncovered this exchange between Charlotte Adams (professional organizer and amateur sleuth) and Tallulah Jones (ice cream entrepreneur and dilettante detective). We’re stunned.

I believe in the value of simple things, tradition, and keeping choices to a manageable minimum to reduce stress. I always have B & J's New York Super Fudge Chunk in my freezer. I find it much better than pharmaceuticals to take the edge of dealing with murder and mayhem.

I am a bit worried by your one kind of vegetable comment. Cauliflower? I realize that you are quite adventurous in your ice cream choices, Tally, however, if you are attempting to plant the suggestion of cauliflower ice cream in my subconscious, I am going to step up and just say no to that.

With all due respect,

I've come up with some wacky flavors, but even I'm not brave enough to try cauliflower ice cream!

Still, I think I see where you're coming from. I guess my ice cream passion is about control and order, too. I find the process of making ice cream very Zen. After a fight with Bree, a stressful encounter with my ex, Wayne, or an evening of committing minor crimes in the name of an unauthorized murder investigation, I can lose myself in all the tiny rituals of making ice cream. Part of that Zen is letting my brain go to its happy place and thinking up new flavors (my newest is called Texas Twister - smooth vanilla with a swirl of amber dulce de leche and a kick of ancho chile).

Any chance I could get you to taste just a little?

Zen, huh? I'm afraid I find my bliss putting order into closets and buying ice cream. I feel responsible for keeping the local economy going. And it never occurred to me that someone could or would make the yummy stuff if their name wasn't Ben or Jerry... Besides lists, the only thing I can really make is a stir-fry. Sometimes that turns out all right.

Interesting that your ice cream obsession is all about order and control. For me, eating ice cream out of the container is pretty much the only out-of-control activity I get up to, often after dodging a bullet or watching my beloved car go up in flames.

I must say, I like your style. As for Texas Twister, let me get back to you on that.

While she does not commit--or solve--murders in real life, Wendy can kill a pint of ice cream in nothing flat. She's also passionately devoted to 80s music, Asian horror films, and reality TV. Wendy lives in North Texas with her wonderful husband and four spoiled felines. You can find Wendy on the web at www.wendylynwatson.com.

Mary Jane Maffini is a lapsed librarian, a former mystery bookstore owner and a lifelong lover of mysteries. In addition to the four Charlotte Adams books from Berkley Prime Crime, she is the author of the Camilla MacPhee series, the Fiona Silk adventures and nearly two dozen short stories. She has won two Arthur Ellis awards for best mystery short story as well as the Crime Writers of Canada Derrick Murdoch award. The Dead Don’t Get Out Much was also nominated for a Barry Award in 2006.

Her latest Charlotte Adams book is Closet Confidential (Berkley Prime Crime, July 2010). She says she’s grateful for all the tips she gets from Charlotte and for the opportunity to eat all that ice cream vicariously. She lives and plots in Ottawa, Ontario, along with her long-suffering husband and two princessy dachshunds. Visit her at www.maryjanemaffini.com.
Posted by Sheila Connolly at 12:01 AM

That was a fun interview.

LOLOLOLOLOL. Right now, Charlotte, I've got your back. My one ice cream is Ben & Jerry's Chunky Monkey. I'm really not an ice cream person. Sadly I'm not a closet organizing person either.

Two of my favorite people in one place--love it! Don't love the thought of cauliflower ice cream, however. I may need to dive into some mint chocolate chip to get the imaginary taste out of my mouth.

First of all, I can't believe Wendy put that exchange out in the world. I mean, Charlotte and I were trying to have a private conversation. But I guess if you're a fictional character, nothing is private.

And I'm not harshing on B&J - it was a love for their adventurous flavors that got me into the ice cream business in the first place.

Thanks for stopping by, ladies.

I like Ben & Jerry's, but I loved all the great gelato in Italy; and that's what the colorful tubs of ice cream in your photo remind me of--especially the lime green in the front. I had some amazine kiwi gelato in Venice--several times. Haven't been able to find anything with that flavor here, so if anyone knows....

The gelato bar in the East Building cafeteria of the National Gallery of Art has wonderful ice cream. I love the walnut and the vanilla with frozen streaks of chocolate in it -- I think it's called stracciatella, or something like that (my spelling is no doubt far off the mark). But oh, the calories. Mostly, I stick to Edy's reduced fat, which is really quite good, and try to forget that real ice cream exists.

Tally (Wendy), I'll trade some C5 Chocolate chip cookies for some Texas Twister...that's definitely my type of ice cream. I'm even willing to go off the diet. Please?

The first gelato I ever tasted was from a street vendor in Florence. I picked a flavor I had never heard of (I don't speak Italian!): nocciola, I think. I took one bite and it nearly blew me off my feet. (In case you don't know, it's hazelnut.)

I can't recall seeing cauliflower ice cream, but I did once try corn ice cream in Mexico. Not bad.

I come from generations of ice cream eaters, so I think it's in the blood. Yum!

I'm with Angi! The way off my diet is to temp me with ice cream...any flavor.

I don't eat much ice cream, but at this moment I'm slurping down the Bunny Tracks. Just goes to show you, all ice cream is yummy if you put enough toppings in one tub.