by Sheila Connolly
I've always enjoyed rules. It's nice to have something to follow, to know where you stand, to have a standard to meet. Writing was no exception when I was young.

Since I am of a certain age, I was taught a variety of rules for spelling, grammar and punctuation. You know, the trusty "i before e except after c," and one my mother passed on to me, "a preposition is a word not to end a sentence with" (joke there, people). Dependent clauses, independent clauses. Does anybody else remember diagramming sentences? What was that all about?

Spelling is holding its own, save for all those made-up words that keep popping up and gaining acceptance more and more quickly. And how many words have shifted their use? Like impact. When I was young, impact was a noun. Impacted was something that happened to a bad tooth. Now impacted is a verb. And likewise friend: once that too was a noun, and now we friend people on Facebook all the time.

But mostly I wrestle with punctuation. As a writer shepherding books into print, we have to submit our work to not one but two editors (not even counting the proofreader), both of whom feel free to tell us how things are supposed to be done. Which is usually not the way we did it. The first editor tells you that your characters are stiff and unsympathetic, and your plot resembles moldy Swiss cheese, and can you please fix it by next Tuesday?

Assuming you survive that battering, your writerly voice intact, the manuscript makes its way to the copy editor (in case you're wondering, Webster's says that must be two words, no hyphen). Danger, danger! The copy editor is responsible for cleaning up all your "errors" in spelling, grammar, and punctuation (and occasionally she nails you for repeating a word or phrase too often). She sends you a multi-page (Webster's has no opinion about that word, so I'm leaving the hyphen there) set of instructions telling you what you were supposed to do (which of course you didn't do, since you've been living in a cave since 1982 trying to write a book and you never got the memo about grammar changes). 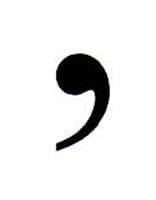 Many of these changes I'm willing to accept, because I really don't feel strongly about them, and I hope they serve to make the text easier to read. But some just rub me the wrong way, no matter how many times I see them. Take "too," for example. I'm supposed to use a comma before a terminal too. Like, "you come, too." That just looks wrong to me.

Or hyphenating adverbs. I swear I can hear in my head some long-ago English teacher saying, "if you use a two-word term as a modifier, you should hyphenate it." This is enshrined in my memory. Like "newly-minted coin." Newly-minted is a single term, isn't it? Nope. Not now. I have it in writing that I may not do that. Unless, of course, the first word is "half." I am graciously allowed to say "half-witted copy editor."

My latest bugaboo is italicizing. Internal thoughts are italicized. I'm good with that. Foreign phrases are italicized. No problem. (But when does the phrase cease to be foreign and become part of our daily language? Like déjà vu? Hoi polloi? But that's for another day.) Book and newspaper titles are italicized. Fine by me.

What's burning me up now is whether a form I've used for years is now apparently a copy editor's no-no (Webster's approves that hyphen): the quotation marks within a sentence. In the past, I would say, I stashed my "bounty" in a safe place. The quotes there signified that I was using the term "bounty" sarcastically or with tongue wedged in cheek. The "bounty" might have been the last cupcake in the box, so the phrase was not meant to be taken literally.

Now I'm told I have to italicize that. I stashed my bounty in a safe place. I don't like it. In this context, italicization means to me that the word is meant to be emphasized (as you might hear it in your head) within the sentence. The copy editor's introduced italicizing looks wrong to me. It sounds wrong to me (see the difference?).

I have this image of editors and copy editors as nice, young (well, younger than I am) women who were English majors in college. I've met a few, and some of them are my daughter's age. Therefore I have to assume that they grew up with a different set of standards than I did. Life goes on. I accept that.

BUT! I'm guessing that the majority of my readers are closer to my age than to theirs. So when those readers read a paragraph with those weird italicized words, they're going to stumble. They're going to stop, if only for a microsecond, and say "huh?" (Not huh, I hope.) And that's going to take them right out of the reading, break the flow, disrupt their immersion in the story. It will work against all that we as writers have tried to create.

What are we supposed to do? Write to make the little copy editors happy? Or write to make our readers happy?
Posted by Sheila Connolly at 12:01 AM

Your account of the variability and evolution of the rules is evidence that the "rules" we believe to be "correct" or "true" are merely the ones that we learned when we were younger. For example, I learned that you would never hyphenate a compound adjective if the first word ends in -ly, as you have done with "newly." Check out the Gregg Manual for extensive rules about when to hyphenate adjectives before a noun.

Really, the rules are merely guidelines. The language is in constant flux. I'm sure Melville and Jane Austen would have a few things to say about what we consider "standard" today, even as we are watching that standard change.

Edwin Newman wrote a series of books about the evolution of the language (he saw it as a decline), and he even did a hilarious bit on Saturday Night Live correcting a caller's grammar on a crisis hotline, but he's seen as more of a reactionary curmudgeon that a social commentator anymore.

Rules are suggestions, especially for creative writers who have a license to evolve the language.

Check out the Motivated Grammar website. It will show you how mistaken most people are about what the rules are anyway.

Hey. The easiest thing you can do is learn which style manual your house uses and conform with that. All the things your editor made you do, I had no problem with. Words in italics? Sometimes they mean internal thoughts. Sometimes they mean emphasis. As a reader, I can figure that out easily as I go. And about hyphenating compound adjectives: We were taught in journalism school that you don't do it when the first word ends in LY, i.e., when you have an adverb acting as an adjective. (They were teaching us AP Style.) You can find that rule somewhere in the Chicago Manual of Style, too, which is probably what your editor is using. For whatever it's worth.

I have learned one thing about publishing: If the editor wants it that way, that's the way it will be. Arguing over dashes and quotes and commas is pretty much a waste of time and energy. Save yourself for the battle over a cover you hate -- sooner or later, that battle will come. :-)

Sheila, has it ever occurred to you that these newly fledged copy editors are often just plain wrong? I will fight style battles when I think the changes will be a constant embarrassment in the printed book.

In The Road by Cormac McCarthy, you'll find that he does not use an apostrophe in negative word contractions: hadn't becomes hadnt, won't becomes wont. It seems to be his writing style for all of his novels.

In my general reading, I've noticed that writers are using fewer commas; I think it must be a deliberate decision in order to increase the reader's pace. Sometimes it gets distracting, though--I have to go back and reread the sentence in order to clarify its meaning. If I run across too much of this type of thing, I stop reading.

Sheila, Somerset Maugham said, "There are three rules of writing. Unfortunately, no one knows what they are."

Plainly, in my case, writing is a job out for which I am not cut.

I think the New Yorker warped my sense of comma usage forever--they use frequently but (in my opinion) well. Not so for much of the world.

I know, I know--the Chicago Manual of Style is the bible and Sandy's right. You do what your publishing house tells you and smile. Occasionally you fight a small battle, but you don't want to be labeled as difficult to work with, so mostly you give in.

Having said that, I was reading a recent book by Diane Mott Davidson this weekend, and I discovered that she did absolutely everything that my copy editor didn't want me to do. And she's a NYT best seller. If I ever become a best seller, can I punctuate the way I want to?

I do read Ms Connelly's books and enjoy them.