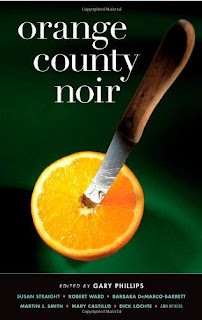 Magazine markets for short crime fiction are scarce, but readers who want a sharp little dose of murder and mayhem have plenty of anthologies to choose from. These collections have popped up like mushrooms across the genre in the last few years, bringing us everything from tales of murder on family holidays (haven’t we all been tempted at least once?) to crime with a supernatural flavor.

While some anthologies are made up entirely of work by crime fiction stars, most also give exposure to work by beginners or lesser-known writers. The number of anthology stories nominated for major mystery awards is an indication of how important the collections have become to the genre.

Some anthologies are highly visible, like the International Thriller Writers 2006 anthology Thriller, which has sold more than 400,000 copies and been published in nine foreign countries. Others have more modest ambitions but are worth looking for if you want to read the best short crime fiction being published.

A lot of anthologies are focused on themes. Akashic has produced a series of noir collections set in various cities and features dark tales from Orange County, California, in its latest. Tony Burton at Wolfmont Press publishes Christmas-themed mystery anthologies, and the profits go to Toys for Tots. 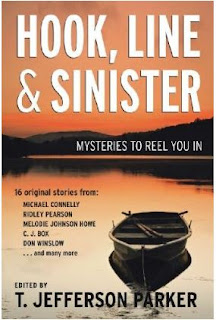 Hook, Line & Sinister, an April release from Countryman Press, is another themed collection that will benefit charity, in this case two organizations that use fly-fishing as therapy. Casting for Recovery helps breast cancer patients and Project Healing Waters aids returning veterans. The anthology’s theme, naturally, is fishing, and 16 bestselling mystery authors came up with stories that involve the sport. Edited by T. Jefferson Parker, the book includes work by such notables as Michael Connelly, C.J. Box, Ridley Pearson, John Lescroart, and Dana Stabenow. And no, you don’t have to enjoy fishing to appreciate these mini-mysteries.

Charlaine Harris’s name on the cover as editor tells you that Crimes by Moonlight is devoted to supernatural mysteries, but it’s not exactly what you might expect. Along with a new Sookie Stackhouse story, the collection includes shorts by Carolyn Hart, Barbara D’Amato, Margaret Maron and other authors we don’t usually associate with the woo-woo end of 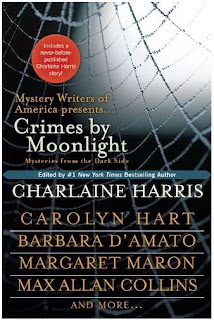 the genre. Writing these stories gave the writers a chance to stretch, and even readers who don’t normally enjoy the supernatural mixed with crime may be pleasantly surprised.

Unusual Suspects, a fantasy/mystery anthology edited by Dana Stabenow, also features a new Sookie Stackhouse story and work by writers like Laurie R. King who haven’t produced this type of fiction before.

Two of the Deadliest, edited by Elizabeth George, features stories by 18 established women authors and five relative unknowns. In its anthology In the Shadow of the Master, Mystery Writers of America also gives exposure to a few lesser-known writers by placing them in the company of stars. 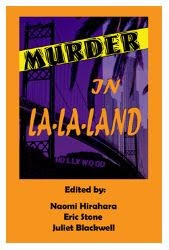 A number of Sisters in Crime chapters across the country have published anthologies, giving some SinC members their first professional publications. Stories contributed by “name” authors lend cachet and draw the attention of readers. The Los Angeles Chapter will launch Murder in La-La Land on May 22 (early copies will be available this weekend at Malice Domestic). The Desert
Sleuths Sisters in Crime recently brought out How Not to Survive the Holidays. 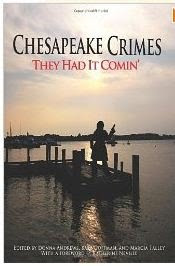 If you have a secret hit list but know you’ll never act on it, you can savor an ample helping of vicarious satisfaction when you read They Had It Comin’, the fourth Chesapeake Crimes anthology from the Chesapeake Chapter. Stories from previous CC collections have been nominated for, and have won, major awards. A fifth anthology is already in the works. (Full disclosure: I’m a member of the Chessie Chapter and I’m honored to be on the editorial committee for the fifth anthology.)

Have you read a good crime fiction anthology lately? Have you contributed to one?

LONE STAR NOIR featuring Texas crime stories comes out this fall. It won't feature myself or Bill Crider as we both got cut due to space limitations.

I went to the launch party for Crimes by Moonlight last night at the Mysterious Bookshop in New York. My story didn't make the cut, but I have since sold it elsewhere, and I've already read the first three stories, all wonderful, by Charlaine Harris, William Kent Krueger, and Margaret Maron. I got great photo ops with Dana Cameron, Toni Kelner, Parnell Hall, S.W. Hubbard, Charles Todd, and others. (They'll be up on my website in a few days.)

BTW, the theme this year's anthology from Wolfmont Press will not be the holidays, but the military. It will benefit Homes for Our Troops, an organization that helps disabled returning vets. For some writers, a soldier protagonist is more of a stretch than a vampire protagonist. ;) But as a fairly new short story writer still exploring the envelope and giving it an occasional nudge, I love the challenge of coming up with a story on a different theme.

I'm a huge fan of anthologies - and had not heard of some of these - Thank You!

Elizabeth--Do you have details on the Wolfmont Press anthology you can pass along? Story length and deadline? I spent 20 years as an Air Force intelligence officer before becoming a novelist, so maybe I could give this a try!

Thank you, Sandy, for promoting anthologies in general and the Chesapeake Crimes anthologies specifically. Anthologies are a wonderful way for a new writer to wet her toes, for an established writer to stretch her wings, and for readers to try out a number of new authors to them.

My fiction is focused on short stories. So far I've only been published in anthologies, and it's working for me (two Agatha nominations)!

The Chesapeake Crimes anthologies have provided many authors, like me, their first chance at publication. We have four or five brand new authors' stories in the most-recent collection, Chesapeake Crimes: They Had It Comin' (Wildside Press 2010). I think the theme really inspired our contributors to wonderful results. Indeed, if you've ever known someone who just really deserved to be kicked you know where - or something far, far worse - you'll like this book. It has 20 satisfying stories of revenge. Ahh, yes. Revenge.

Thanks for the update on Wolfmont's new anthology, Liz. I've been in and out of the house all day and haven't had a chance before now to pop in and see what's going on here.

The anthologies being published by SinC chapters have introduced new writers to mystery lovers, and they deserve a wide readership. If you hear of one, buy it! You won't be disappointed.

I would love to submit to anthologies that allow submissions by writers who are not famous (at least, not yet!). The biggest problem I have is finding out about them -- you can't Google "mystery anthology" and find a list of anthologies that are looking for submissions ... so how DO you find them?

SinC-IC did an anthology a few years ago. Murder Across The Map.
Needless to say, I wanted in, and it was my first anthology inclusion, and my first floating home story. It's still for sale, I found it on Amazon.

I just had a weird notice. I received an email today about an anthology just published with one of my flash fictions in it. Someone told me about the site looking for flash in Six Sentences. So I sent it out, and the only response I got was the story with a happy smile next to it. Today, I got the link where to buy it and the comment:
"Your work is prominently displayed in the mosaic".
Very high priced, but I'm thinking of buying it to see.
Patg

My first story ever was in the Sacramento Sisters In Crime anthology CAPITAL CRIMES, which came out in 2008. It got me started writing short stories and I've since had several published! Of course, I'm a big fan of anthologies.
Teresa Leigh Judd

I also seem to remember a couple of good DC reprint comics, Shockwave or something, that had Morrison's Animal Man and his Hellblazer story along with Gaiman's Black Orchid. Also some Swamp Thing. sexy lingerie

The Bellamy Brothers, have released a career-spanning collection titled The Anthology,