Although they called it a classic nor’easter, New York City was undeterred by yesterday's dramatically anticipated snow. Leonardo the plasterer (yep, that’s his name, and the super says he’s a Leonardo of plastering) arrived on time from his home in the Bronx to fix the ceiling of my shower, 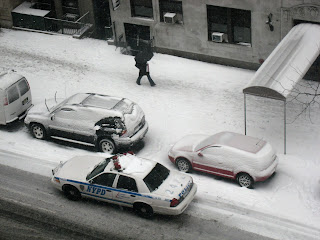 which had been shedding plaster dust on my head, if not accumulating in drifts, every time I took a shower. Traffic was moving outside my window (and seven stories down) on my street on the Upper West Side. Dogs and pedestrians were out and about. I was a little disappointed.

Last week, when areas further south and west got buried, we got no snow at all. This time, it started to fall later than expected. That’s why the city didn’t get anywhere near immobilized. 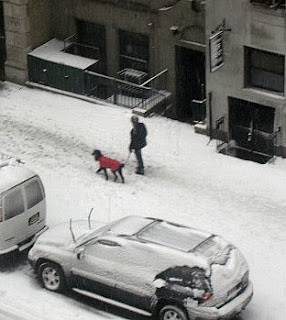 The predicted time was midnight, when very little is moving and the snow accumulates on the street as well as the sidewalk with only a few buses and taxis to tamp it down as it falls. If that had happened, we would have woken to a winter wonderland, even if it didn’t last all day.

The large institution where my husband works, a thirty-block walk for him and inaccessible to his co-workers when transportation from the suburbs and the outer boroughs becomes a problem, made the decision to be closed on Wednesday in advance, to his relief. More often, he has to trudge to work at the beginning of a blizzard and then fight his way back when it gets worse and they send everybody home. We could have celebrated the snow day by sleeping late—if the plasterer hadn’t arrived bright and early. 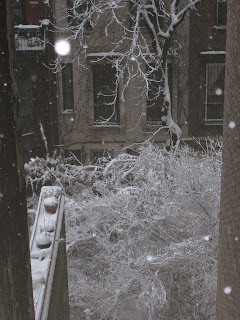 We could have spent the day in our cozy apartment staying warm and dry—if my printer hadn’t decided this Tuesday was a good day to die. So we bundled up and trekked the half mile to Staples (remember that shopping in Manhattan does not involve a car), got immediate service, and staggered back home with a spiffy new all-in-one. We even managed to install it and get it to work wirelessly.

By four in the afternoon, the storm was still raging, the snow was piled higher on the parked cars along our street, 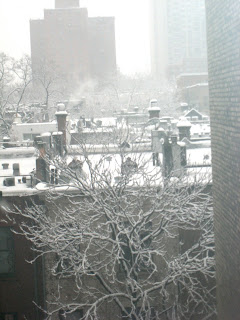 the rooftops, and the trees in the hidden gardens tucked away behind the brownstones and apartment buildings of New York.

Today, the sun is shining. I may put on my boots and take a walk in Central Park, where the snow will be pristine—for about five minutes. 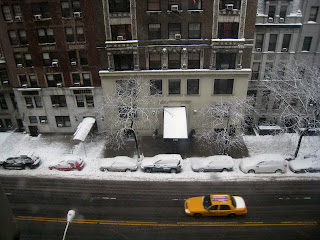 Is yours a walk up? My daughter lives in a 4th floor walk up in Brooklyn, and lemme tell ya, all those steps are a killer for us flatlanders from the Midwest.

Finally we got snow.

I love snow in the city, especially when it first falls down. That's when it's the perfect time to walk in Central Park.

Today it is all about slush and ice.

No, it's a 20-story prewar apartment building with an elevator. I've only had to walk the seven flights of stairs in an emergency. And yes, it'll probably be all about slush at the corners for a couple of days.

This is now officially the snowiest winter EVER in the DC area. Three blizzards in a matter of weeks. Don't talk to me about your puny NYC snowstorm. We got ya beat by a mile. :-)

Sandy, I agree--here it was much ado about nothing. I did have my run in the park around noon, from 86th Street all the way down to Columbus circle. Road was dry, snow pretty but definitely not pristine. I was glad I hadn't lugged my camera--until I got to Sheep Meadow, across from Tavern on the Green, where snow sculptors were still at work (or play) making a variety of snow figures (people, a giant dog, a teddy bear) and one very classy turreted fort 3 or 4 feet high.

The Heavy snow in New York has just disturbed the city and the snow has piled up and accumulated on the streets and the traffic system has immobilized due to heavy snow and frost. It is much better to stay warm at home and enjoy the snow by being confined inside the home.

Whаt's up, its pleasant paragraph regarding media print, we all understand media is a great source of information.