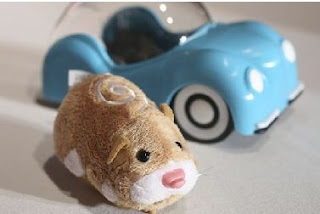 Every Christmas season brings new toys, but only now and then does one catch on and become THE toy, the one every kid absolutely must have and parents drive themselves crazy trying to locate and acquire. Remember Cabbage Patch dolls? This year the “it” toy is the Zhu Zhu Pet, a toy hamster that does all the cute things real hamsters do without expecting food or a clean cage.

Zhu Zhu Pets were created by a guy in St. Louis who has suddenly found himself the head of an enormously profitable family-run company based entirely on a little mechanical rodent. The hamsters are supposed to sell for $10, but they’ve become some scarce that they’re fetching several times that amount on the internet. And once you’ve bought the hamster, what kid will be satisfied without some or all of the “accessories” available? The slide, the skateboard, the fun house, the playground, the little car and garage, the adventure ball, the wheel and tunnels, the “hamster city” ($129.99) – swallow hard and pay up, if you want your kid to be happy with his ersatz pet and stop begging for a real one. (For a while there, it seemed the Zhu Zhu Pet called Mr. Squiggles, pictured above, might be recalled, after a consumer group claimed it contained harmful levels of antimony, but the government has cleared Mr. Squiggles of the charge.)

What will you do if you can’t get your hands on a mechanical hamster for the kid in your life? Don’t despair – this is the golden era of fake pets. Consider the Zzz Animals, artificial puppies and kittens that do nothing but lie on their beds (included) and sleep. According to a catalog, their “little midsections” rise and fall in an amazingly lifelike imitation of breathing. And “the best thing about them is that they’re not real!” No walking, no feeding, no messes to clean up, no biting visitors or scratching the furniture. These “pets” never even wake up. Orange tabby and black and white kittens are available, along with a line of puppies – chocolate lab, pug, Shih-Tzu, beagle, schnauzer, golden retriever, Yorkie, Cavalier King Charles, and just in time for the holidays, the new Portuguese water dog that looks exactly like Bo Obama. Batteries not included.

Looking for something more active? Check out the monkey and puppy that say “Hello!” and proceed to “roll on the floor and laugh and laugh” before saying “Goodbye!” and shutting down. 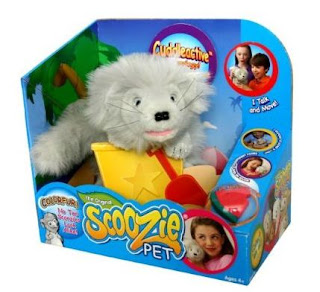 Then there’s Scoozie, the all-purpose mammal. It looks kind of like a squirrel, but it purrs like a cat and wags its bushy tail like a dog – when it’s happy. If you neglect a Scoozie, it growls at you. It has light and sound sensors and responds to its environment. This fake pet does have to be fed, although the catalog copy doesn’t reveal its dietary requirements (perhaps there’s an expensive fake food available?) or whether it needs a litter box or regular walks. It sounds like almost as much work as a real pet, but I guess you save on vet bills. Maybe that’s the next thing: an artificial pet that needs shots.

If Scoozie is too much trouble and the rolling, laughing monkey and dog freak you out, try the Christmas bear, which will read “The Night Before Christmas” in what is described as “a soothing male voice” (accompanied by soft background music) while rocking back and forth. It will read your child to sleep so you won’t have to do it.

There’s a whole industry producing artificial life forms that are promoted as trouble-free, mess-free substitutes for the real thing. Maybe they fill a need in families where no one has the time to care for live dogs and cats. But it all seems rather sad to me. A child growing up without the companionship of a pet with a unique personality and real needs is missing out on a vital connection to another species. I have lived my entire life with cats and dogs, and through them I have learned to respect and care for all animals. They have taught me that sometimes I have to put my own needs and plans aside. They have shown me that if I give love unconditionally, I will receive it in return, many times over.

I can look to my left as I write this and see our cat Emma sleeping on her pillow under a lamp. Her midsection (not so little, alas) rises and falls with each breath. Any minute she’s going to wake up and start making demands, as real animals are inclined to do – pet me, feed me, love me. 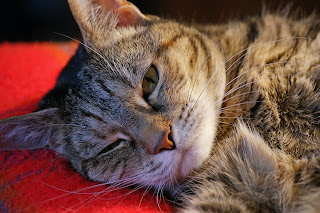 Her brother Gabriel is already sitting by my chair, giving me that look I know so well: If I don’t leave the computer right now and give him a meal, I’ll find out just how much of a nuisance he can be. 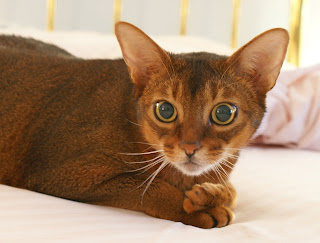 They drive me crazy sometimes with their fussy appetites, and they scare me witless when they get sick.

I wouldn’t trade them for all the mechanical hamsters in the world.

The funny thing is that even though we have a corgi and two cats, my daughter still wants these artificial animals!

The reality . . . at least to me, having watched a demo of the "new" hampsters on TV . . . is that the artificial ones are just as annoying (sound and movement wise) as the real thing. I pity the parent who buys one.

As a mother who never said no to the real kind of pet I don't think the fake hamsters would have cut it around here. But we were a house hold where someone was home on a regular basis(even when I worked as a school librarian my hours were such that I could slip home to check on a furry that needed attention if necessary). For families that drop their kids at daycare at 6 or 7 in the morning and don't get to pick them up until 6 or 7 at night, these critters may help fill the void of the real thing.
On the nice note, the inventor or CEO or whatever of this little business delivered hundreds of them to Both Cardinal Gennon Children's Hospital and St. Louis Children's Hospital last week.
Caryn

I hope they never do reach the ultimate in artificial "pets" that perform without any of the hassles. Ira Levin envisioned them in 1972: he called them The Stepford Wives.

Sooner or later people will be able to acquire artificial children -- always sweet and obedient, can be left alone, will never crash the car or run up a big tuition bill at college.

Sandra, I love your cat photos. They look professional, and the cats always look so content. The second kitty looks downright Egyptian in his lordliness.

I understand the appeal of toys. Frankly, they appeal to me, too. Maybe it's because they represent something we'd all like to do in our secret hearts: indulge in something totally fun in an atmosphere of endless leisure.

No mechanical pet could ever look at you with eyes so full of unconditional love. Your dog or cat doesn't care if you're having a bad hair day or if you've put on a few pounds. Our relationships with our pets are the purest relationships we'll ever have. No. I could not give that up. In fact, a few weeks ago, I got a puppy for my 82 year old mother. Sure, the puppy adds some work and care to the household, but she has filled something in Mom that maybe nothing else could.

Thanks for the gracefully written post and the gorgeous photos of your feline friends.

What beautiful cats. Gabriel looks like a Burmese; my sister had one named Sammy for 11 years and he helped her get through serious health problems and entertained her as well as being her constant companion. She even got a laptop computer which allowed him to sit on her lap, too.

I can't imagine anyone wanting artificial pets over real ones but when I was a kid, I had lots of stuffed animals so it's understandable. Children want something of their very own to cuddle.

Will the authors on this list-serve post their favorite books of 2009? This could be fun.