Mr. Monk Wraps It Up

Everyone who leaves a comment today will be entered in a drawing for a free copy of Mr. Monk in Trouble by Lee Goldberg. 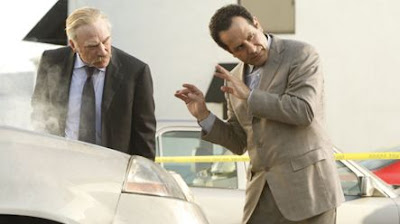 Two more episodes, and Monk will be TV history. On December 4 we’ll say goodbye to this most unlikely of heroes, a phobic, obsessive-compulsive, self-absorbed, grief-wracked detective who somehow manages to be both lovable and admirable.

When the series started eight years ago, I didn’t think it would last long. Who could bond with a character like Adrian Monk? Who would want to watch him struggle with his demons week after week? I could and would, as it turned out, along with plenty of other people. Tony Shaloub’s unique creation has fascinated, exasperated, amused, and charmed us. The show’s web site caters to a legion of fans with Monk games, an interactive section for those who

want to try solving the murder of Monk’s wife, a Monk-fan-of-all-time contest, a Monk lookalike contest, quizzes to test your knowledge of the show, an Ask Randy Disher blog, and products such as videos, books, mugs, tee shirts, and hats.

As the show winds down, questions that have tantalized us for eight years are being answered. Last Friday’s episode, in which Monk’s desperate wish to return to the San Francisco Police Department was granted, ended exactly as I knew it would, with Monk realizing that he prefers to work freelance, with Natalie by his side. (Frankly, I’ve always wondered how he made it onto the police force in the first place. I can’t picture him, with his lifelong tics and phobias, getting through police academy training.) The final two episodes will settle the mystery of who killed Trudy. Then it will be over, leaving us with reruns and fond memories.

The episodes that stand out for me are the most poignant, when Monk had to cope with the death of the psychiatrist he relied on and when a Trudy look-alike surfaced to break his heart all over again. I loved those moments when Monk confronted criminals and displayed the tough, resolute cop side we seldom saw. He could subdue a suspect and use a gun when he had to. It was a kick to see Monk go undercover as a surly mob boss. The appearance of John Turturro as Monk’s brother was brilliant. An agoraphobic trapped in his own house with mountains of old newspapers, he made Monk seem well-adjusted by comparison. I never liked his first assistant, Sharona (Bitty Schram), because I thought she bossed Monk around too much. I’m a big fan of Traylor Howard as Natalie, and now I get irritated with Monk when he mistreats her. Ted Levine as Captain Stottlemeyer is always pitch-perfect, and Jason Gray-Stanford as Lt. Randy Disher is a treat to watch, even when Disher is singing his dreadful songs. 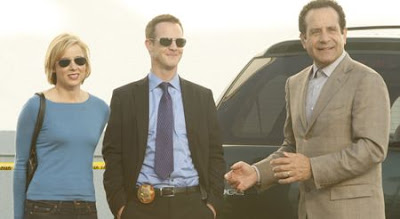 I have a feeling these characters will stay with me. I’m always going to wonder what’s become of them, what they’re doing now. Will Monk’s life change after he solves Trudy’s murder? Will he ever find another love? Will Natalie fall in love, marry, and leave Monk? Will Randy ever get a recording contract? Will Stottlemeyer’s new marriage survive his bride’s fears about his work? 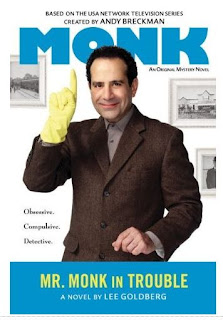 Lee Goldberg, who writes a series of books based on the show, will keep fans going for a while. Lee tells me that after Mr. Monk in Trouble, out in December, at least two additional Monk novels will be published. “I hope there will be more,” Lee says, “because I want to write them.” If you need more Monk after the final show, leave a comment today and you’ll be entered in a drawing for a free copy of Mr. Monk in Trouble.

What were your favorite Monk moments? Why does Monk appeal to you? Are you surprised the character became so popular and the show lasted so long? And – the burning question – do you prefer Sharona or Natalie?

It's sad to see the end of series, isn't it? I felt the same at the end of Dexter's Inspector Morse.

I think you hit the nail on the head with Monk's appeal. He exasperates us, but engages us. And he tries so hard sometimes to overcome his limitations. Great, great character.

I don't think there was one Mr. Monk, I didn't enjoy ---- it was a little pleasure to see the new ones as the weeks went by! I will truly miss him ---- have also read all the books (the last one wasn't as good as usual) but, will dontinue to read them and watch for all the re-runs of Monk! Thank you! Lynn/MI lynn@tangledyarn.com

I never thought the show would last the first season, but so glad it did. Maybe with the new books coming out after the show ends, Monk could return in movies to update on his happenings.
Thanks for offering the contest.
Happy Thanksgiving.

This is one of my mom's absolute favorite shows! I know she will miss it, too. I wonder what Tony Shaloub's next project is going to be? I loved him as Ian Stark, on the short-lived sitcom Stark Raving Mad. He was hilarious as a author with a bad case of writer's block and Neil Patrick Harris as the new agent trying to help him get over it! Thank goodness for reruns, online streaming and DVDs, since they insure we will never really lose our friend Mr. Monk!

I must confess that I never watched this show but after looking at their website & Wikepedia I will definitely watch it in reruns (which I hope that they will do). How I missed a mystery show with humor is beyond me. I would like to read one of the books. Thank you for letting me know about Mr. Monk.

My husband calls MOnk a sit-com with crimes. Monk's personal life is what always interested me most, but they have had some original and intriguing mysteries too.

I am already mourning Monk! I have loved this show since the first episode. One of my favorite shows was the one where Monk goes to Mexico. It appears someone drowned while skydiving. If memory serves, Lee Goldberg wrote (or possibly co-wrote) that episode. Oh--Natalie, of course!

I liked Sharona and was prepared not to like Natalie. She won me over and I though Sharona was brassy and rude when she returned.

I'll miss all the characters, but if I don't watch the reruns for awhile, they will all seem new to me.

Monk is a very appealing character. Brilliant in many ways but also quite flawed. It has been nice to watch him improve over the series. I think Mr. Shaloub (sp?) portrays him with great humor and sensitivity - so we can both empathize with Monk and then laugh hysterically when he goes totally OCD on us.

I confess: I'm a hardcore Sharona fan. Don't hold it against me.

Great to hear about these books!

Before I shot the TV, I did see this series, and my take was, "this is too good to last." I felt that way about FRANK'S PLACE and TEDDY Z, too, and I was right.

Happily, I was wrong about MONK! So, maybe the last episode I saw was the one about Natalie's daughter's fish, but if there's a DVD in the future, I'm there.

Tony Shaloub has never been anything but brilliant, but Mr. Monk was a role from heaven for him.

I never watched the show regularly only because I wasn't sure when it came on, and I don't watch TV that much. I was always thrilled when I saw Monk was coming on. I think we enjoy him so much for the same reason we cheer for the underdog in sports. We want those who are most challened to win. And Monk does.
Now I need to go and find out what day and time his shows come on.

I watched the show from the beginning but then lagged off for awhile. Am back for this final season. My favorite episode was from a few years back when there is an orphaned (?) boy that Monk wants to adopt. He realizes, at the end, he can't, not only because of the legal reasons but for his personal ones as well. It, along with most of the personally poignant ones are my favorites. Love Natalie and was reminded why when Sharona returned this season. Randy's band episode was fantastic. All in all, a good series that I'll miss.

I missed this, but I love Monk. So sad to see the show end, but I'm thinking it'll probably be sold to another network and be renewed. I hope anyway.

I enjoyed the show from the beginning. I also like Natalie better and I'm glad it's ending with them still working together. I don't think we are ever going to find out what was in the Christmas present that he received from Trudy and he never opened. I want to know and I don't for fear of being disappointed. I enjoyed watching all of the shows and will miss them. I've never read any of the books but I would love to.
mittens0831 at aol dot com

Well, I was wrong! lol Monk opened the present last night and I'm not disappointed at all!
mittens0831 at aol dot com

Natalie I think was a bit more sensive to Monk's problems. I love the scene in the finale where she tears up at Monk going to see a movie, like it's the accomlishment of a child she's watched grown. Monk appeals to me because he's such a sensive but inperfect charater. He was able to make his disability funny without ever being taunting. I always thought 'Monk' treated disability in such a good way. Adrian Monk was a great charater, able to be funny about his problems without ever being mean about them, and also educating the public on OCD. The show succeds because Adrian Monk was a different kind of hero.

Wish Monk was back on.

Please help spread the word to help feed and nourish local hungry kids! These items are always needed (in individual servings): GRANOLA BARS FRUIT SNACKS APPLESAUCE CEREAL BOXES (small Cereal To Go Containers. Alcohol outlets (if any) usually remain closed throughout the month. If the cereal is a unrefined grain, it probably has a reasonable content of iron from the grain itself. The problem is, Monday is french toast day; Sheldon refuses to deviate from his schedule, so the mistake is unforgivable in his eyes.