Bonding with Buffalo, Butterflies, and the occasional Bear . . . 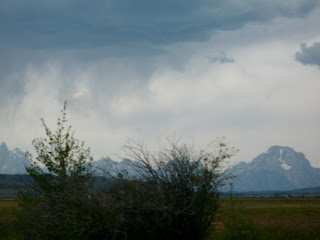 Recently we traveled to Yellowstone National Park with our oldest son and his wife. Our youngest son met us there and we spent a week seeing the wonders of Yellowstone. We passed the Tetons (picture on left) on the way in, and we were impressed with the beauty of those mountains as well. And the snow still decorating the highest peaks.

From Monday to Monday we spent each day seeing a different part of the park. Yellowstone, by the way, was the first area to be declared a national park in the entire world. If you haven't been there, you don't know what you're missing. 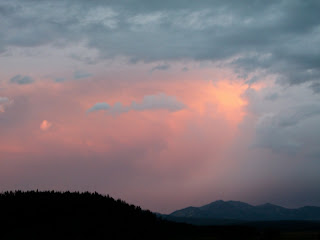 Right off the bat I fell in love with the buffalo, whether a herd or the occasional loner. At first I worried about the loners until I bought and read a book about their habits and learned that the males like to wander off on their own, and it wasn't necessary for me to fear that they'd gotten themselves lost from the rest of the family. After that I was able to relax and enjoy watching them. 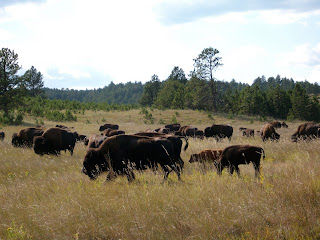 What I really loved about the loners was the sight, here and there, of a two-ton male, head lowered, focused on his mission, marching down the highway (usually against traffic) never distracted from his journey either by the other wildlife or humans (like me) snapping pictures and admiring his bulk from the safety of the car. I envy that kind of focus.
Buffalo might look a bit dumb, but they aren't. A lone buffalo can hold up traffic for great distances (because who wants to pass one and risk having their car gouged or bumped by something that large?) They can run faster than humans, at thirty-two MPH, which is why park rangers will warn you quite severely not to approach them. And they aren't afraid of anything. Even a coyote or wolf wandering through the herd doesn't seem to upset them.

It was rutting season when we were there, so when gathered into a herd, the buffalo communicated with loud grunting noises, which I can easily imitate for you, should you . . . no? Oh. Okay, never mind. And they fight with each other. THAT was quite a site. And they can be silly, rolling around in the dirt, casting huge billows of dust into the air. And did I mention that one evening as we were leaving our campsite, we spotted three buffalo wandering through the campground? It's not a place you can aimlessly walk, you have to be aware.
The really young buffalo are brown and look like a lost calf from a beef herd, but within a year or so they turn black and begin to grow the hump and the dark hair. Mostly we were able to tell the females from the males only because the females often had a youngster tagging along.
The sight of several hundred buffalo swimming across a river and crossing the nearby highway to reach better grazing is something I won't soon forget.
We didn't see a lot of butterflies while there, even though the wildflowers were still blooming in much of the park, so much so that I nearly filled my memory stick with pictures of the different blooms. But one butterfly landed on my hand while I was leaning on the car. I was so surprised I missed getting his picture, but I *think* it was a Zebra Swallowtail. Don't hold me to that, I haven't had time to look him or her up.
As to the bears, everyone who passes through Yellowstone wants to see a bear, but now that humans aren't allowed to feed the bears, sightings are quite rare. We got lucky on day one, and only then. After that we didn't see any bears, though we kept our eyes peeled every time we were in the car. Our youngest son saw one on his way home, but we left by a different park entrance. Sigh. Anyhow, on our first real day in the park, at sunset, we saw a bunch of cars parked on the side of the road. We inquired and discovered that a grizzly had been spotted. We soon saw him down the hill from us, moseying along. While we were parked there he crossed the road to our side, ate his way through the resident wildflowers until he was just a few feet from our car, right beside us. Flashes from cameras went off everywhere, but the bear behaved as if no one was around, casually munching through the flowers. 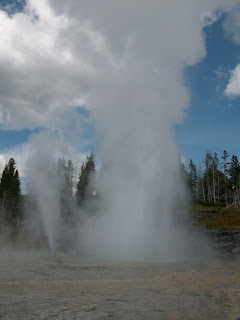 The geysers at Yellowstone are amazing. Old Faithful was pretty, but 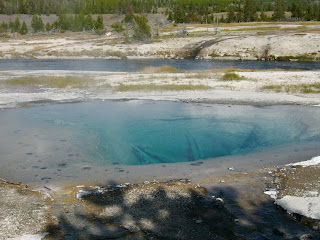 there is another, Grand Geyser that only erupts every 14-17 hours and we happened to be there at the right time. It was like watching white fireworks, so high and so amazing that people cheered while it went off. And people waited for over two hours to see it. Our wait was only about thirty minutes. Besides the geysers there are pools that are bright blue and so deep you can't see the bottom, and the water is far too hot to touch. Amazing sights.
Besides the buffalo, my other favorite was the wildflowers. In one spot, high on a mountain the entire side of one hill was covered with yellow blooms. And this was at the end of the blooming season! 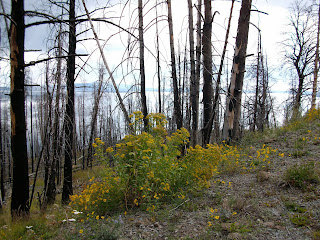 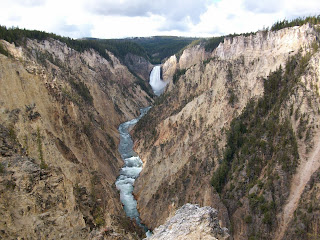 There is a huge lake and lots of waterfalls in Yellowstone, some a short walking distance, others quite far. Our oldest son, having spent more time in Yellowstone than we had, was our guide, and he hiked the daylights out of us each day.

One last thought . . . we heard far more words in foreign languages than we did in English. Lots of folks from foreign countries enjoying one of America's most beautiful destinations. With the economy like it is, I'm hoping more Americans will choose to tour our wonderful country instead of traveling overseas, and trust me, Yellowstone should be top of the to-see list. Followed closely by the Grand Canyon. The Black Hills were beautiful, and Devil's Tower, but nothing holds a candle to Yellowstone. If you have a chance, visit there. But you might want to board your pets with someone, it's not always a good place for them. And use caution taking small children to the geysers and the hot pools.
Have fun, and say hello to the buffalo for me. As we were leaving the park the last day, several buffalo lined up at the exit to our campground to say goodbye. It's nice to know their mothers raised them to have such good manners. I hope they don't miss me too much.
Posted by Lonnie Cruse at 3:38 AM

Lonnie,
I hiked Yellowstone and Grand Teton in August, and I hiked Acadia in Maine last year. I agree with you, Americans should get to know their land. For anyone heading out in the direction of Yellowstone and Grand Teton, I would also highly recommend Craters of the Moon just outside of Arco, Idaho (about a 45 min. drive west of Idaho Falls). This is hundreds of miles of lava flows, craters and lava tubes, which were used as caves by Native Americans and can be explored. The astronauts trained here back in 1969.

Did you see moose and bald eagles in YNP and GTNP?
Mary Beth

Wonderful report, Lonnie. I'm envious! I hope we never lose places like Yellowstone, or the animals that live in peace within them.

Zebra swallowtails look like no other butterflies. Here's a link to a photo:
http://tinyurl.com/yem4njd
Its tail may vary from one part of the country to another.

Mary Beth, I saw one moose but nobody else did, so, sigh, they didn't believe me. I'm hanging onto my moose sighting. Bald eagles? The others thought they saw them but I didn't so I'm not believing them until they accept my moose sighting.

Sandy, THAT's the butterfly! Thanks for the link.

Wonderful post, Lonnie, and nice photos. Sorry I missed Yellowstone. Thank goodness for folks who share their pictures and words!

Oh, Lonnie, I enjoyed the trip you just gave me to Yellowstone! Sounds fantastic. I saw the Grand Canyon this summer. Yellowstone will have to be next.

The Buffalo is my god, magnificent, regal. I worship him and her and wolves.

Beautiful photos, what a lovely display on the website. If any more are hidden, let us know where to look. Will send this link to friends.