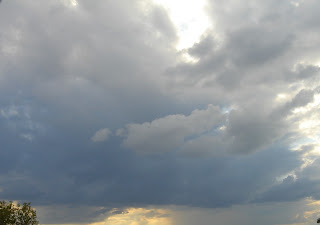 Did you hear the one about the woman who was struck by lightning recently while standing indoors in her own kitchen? It certainly got MY attention, so I clicked into the news story reported on Yahoo! and watched the video of the victim being interviewed by a reporter. The woman survived and is hale and hearty, but what a scary scenario. She was standing at the sink, holding a metal baking pan. As she turned the pan over, lightning came into the kitchen through what looked like one of those "can" lights in her ceiling, struck the pan and glanced off it into her, entering her chest area and exiting her foot.

The woman's nine-year-old son witnessed the event and called 9-1-1 when his mom could not respond to him. There were other children in the home, uninjured, thankfully, and he was the oldest. Rescue workers were sent out and mom was saved. Good thing she'd trained her son so well. But imagine being struck by lightning inside your own home. Yes, we all know not to stand by open windows or talk on a corded phone during a storm. And we've been warned not to take a bath or wash dishes during a severe storm, but she didn't have her hands in water. And lightning through a light fixture? Yikes. No lightning in the above picture, but I like the dark clouds. Well, unless they bring a tornado along.

No lightning in this picture either, but I did manage to get a shot of a rainbow. 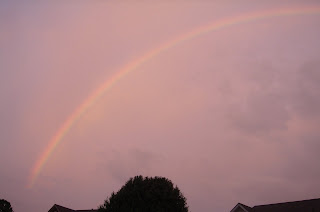 According to Wikipedia, lightning can also occur at the erruption of a volcano or during a dust storm. Who knew? And I seem to remember reading somewhere that lightning can go from ground to sky as well as sky to ground. Scary thought.

We get lots of lightning around here. It's beautiful to watch, from a safe distance, which used to be inside one's home. Because it seems to be high up and far away, we can be tempted to take chances and watch it outside. But we probably all know people who've been struck by lightning. Not fun. Can be fatal. 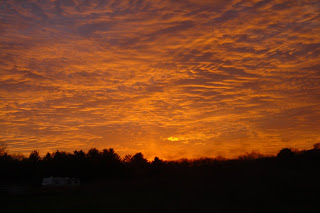 The cloud formations in this area tend to be pretty spectacular. I like taking pictures of them (again, when there is no sign of lightning.) I wonder what it would be like to touch a cloud. Probably pretty cold. But cloud formations often turn ordinary sunsets into jaw-dropping events. Again, something I love to watch. I wrote this blog post after going outside late in the evening to trim a bush and got caught up in sky watching.

How about you? Are you a cloud watcher? Storm chaser? And if a storm chaser, is your insurance paid up?

Thanks for stopping by!
Posted by Lonnie Cruse at 3:37 AM

Scary! That must have been a one in a million type thing.

I love to watch storms...from safely indoors. At least, I THOUGHT I was safe indoors!

With all due respect to the seriousness of the danger, it's good to find a reason for NOT washing the dishes.

Wow, Susan, I hadn't thought of it as a good reason not to wash dishes! Thanks.

A few years back, I was washing dishes at the sink when lightning struck--not me, but the well buried under the front lawn. How did I know? The house lit up like a movie shoot, the thunder was simultaneous, and the water stopped running. Nonetheless, for six months afterward, the insurance company spewed out computer-generated letters warning us that insurance fraud was against the law. (Eventually they paid up, but they made us jump a lot of hoops first.)

I used to love violent storms--until I became a homeowner. Now I worry about lightning strikes and one of the giant trees outside falling on the house.

I'd rather chase rainbows. From a safe distance.

Violent storms with lightning and strong winds -- we get a lot of them in the DC area in the summer -- scare me out of my wits. We have two enormous maple trees, one very close to the front of the house and the other very close to the back. I can envision both of them coming down at the same time and pancaking the house, with us and the cats in it. I won't go outside when lightning is happening, but I know it can come right into the house and get you.

All that aside, I find weather fascinating. It's always a bit surreal to look up and see those fluffy-looking white (or black) masses floating overhead, and to see water or ice or snow falling from the sky. It reminds me that life exists on Earth only because the planet is enclosed in a tight envelope called the atmosphere.

I've liked storms since I was a little kid. And I agree with Susan. Never wash dishes during a storm. Or even when there might be a storm nearby. Like in a neighboring state.

Thanks for the comments everyone, and I particularly like Bill's idea of not washing dishes if there's a possibility of a storm in a neighboring state!