Congratulations! It's a Sequel!

If the first published mystery seemed like we’d just given birth to a long-awaited heir, having the sequel published felt like giving birth to the second child in the family. It's still exciting, but maybe not quite as magical as the first time round. You know about those sleepless nights. You know about those blow-out diapers. But you also know about those toothless grins and that newborn back of the neck sweet smell. In short, you know what to expect, so the stress is less.

Yes, we love both books equally, but differently. Frankly, the second child is a lot more fun! You're not afraid you're going to break something every time you pick her up. But even the second-time gestating a baby or a book, you’ve still got to walk around for nine months (or in our case, almost two years) like a beached whale. Finally, finally, the newborn, or sequel, is here, and the joy is immense.

Still, going with the baby comparison, with a second child – or sequel – you’ve figured out some shortcuts. You can better focus on the issues that are most important. Sure, you still sweat the small stuff, but not as much as the first time around when it seemed like you were in a foreign land, didn’t speak the language, and were without a guidebook or a guide.

So what did we learn when writing, and now promoting, Murder Takes the Cake? 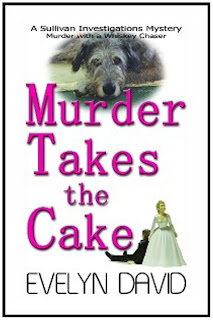 First, we were no longer strangers in a foreign land. We’d already made some friends, both the ones we’d created on the page and those we’d made while promoting Murder Off the Books. 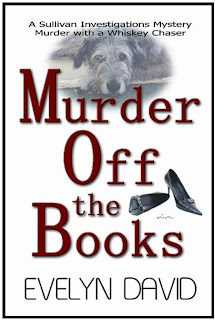 Writing about Mac Sullivan, Rachel Brenner, the delightful Whiskey (Irish wolfhound extraordinaire) – and the supporting cast of characters – was like having a family reunion…only in this case, we like all of our family. It was much easier to start a story already knowing how the key characters behave, what their speech patterns would be, how they would react under stress, their jokes and nervous tics. It left us free to concentrate on the new guys in the neighborhood – the ones we brought on stage as we created Murder Takes the Cake.

Second, we knew each other better. We knew who was better at the first drafts of particular types of scenes. We both write all characters, but like dancing, someone has to lead. With the second book, we fell into an easier pattern of who wrote what and when. We eliminated a lot of false starts and stops. This familiarity with each other's strengths led to fewer missteps and a smoother overall writing experience. We wrote faster and leaner. We laughed more.

Third, we were confident in our ability to take an idea for a story, craft a novel, and get it published. With the first book there is always an uncertainty, a flicker of doubt in the back of your mind that you can't do it, that there is some mysterious thing that published writers have that you don't. There is a point in writing your novel where you hit a wall – and you don't see any way through it or around it. Many writers just give up when they smash into that wall. Somewhere around the hundred page mark, the plot in your manuscript is either starting to pick up speed or beginning to fall apart. In both books, we hit the wall. The first time we came to a dead stop and pondered the size and thickness of the wall for about a month. We questioned our ability to finish. Eventually we figured out where the problems were, and made it to the other side. The second time we were expecting the wall. We brought sledge hammers. When we busted through, we did it without the self-questioning angst of the first book.

We're sure now. We are writers.

We are very proud of our children.

And like the Waltons, we like big families. So look for more siblings in the Sullivan Investigation series. We’re hoping to deliver again in 2010.

Evelyn David is the pseudonym for collaborators Marian Edelman Borden and Rhonda Dossett. Marian lives in New York; Rhonda in Oklahoma. Until they finished the first draft of Murder Off the Books, they’d never spoken. Afraid to jinx their success, they still haven’t met in person. For more information about their collaboration and to read excerpts from both mysteries, please visit their website at www.evelyndavid.com.
Posted by Elizabeth Zelvin at 3:00 AM

congrats you guys! the cover is great. Your 'baby' is a keeper! Much success with it!
Chris Verstraete
Searching For A Starry Night, A Miniature Art Mystery

Thanks Cris, give "Petey" our best!

Rhonda
aka The Southern Half of Evelyn David

Congratulations on the new book, Marian and Rhonda, and thanks for being with us this weekend.

I'm still waiting for my confidence as a writer to kick in. :-) After I finish each book, I feel the way Sue Grafton claims to feel: How did I do it? I can't possibly do it again! I'm a late bloomer in every way, I guess.

I'm so impressed with your successful collaboration--and your resisting the temptation to get together at least once.

Thanks so much for hosting us today. I think Marian and I will probably meet one day - right now we're just afraid to change a system that works for us. We don't want to jinx anything.