The Wildlife in My Yard

Many years ago, I saw the Olivier movie version of Hamlet with someone who’d never read or seen the play in any form. I remember constantly having to shush him as he laughed with delight at discovering where “all those one-liners” came from: “To be or not to be,” “the play’s the thing,” “something’s rotten in the state of Denmark,” and “frailty, thy name is woman.” Before images and turns of phrase become cliché, someone with a gift for a fresh turn of phrase has to think them up. Shakespeare probably holds the record, certainly in English, for original expressions that remain vivid and well used four centuries later. I suspect that his collective works is topped as a source of “one-liners” only by the Bible.

Many useful metaphors and similes, however, have emerged not from literary genius but from everyday observation. I first read Hamlet at fifteen (and fell in love with the melancholy prince, whom I pictured as a cross between Olivier and my high school English teacher). But not until much later in life, when I acquired my first backyard bird feeder, did I realize that such expressions as “the pecking order” and “the peaceable dove” are based on actual bird behavior.

For the cost of a forty-pound bag of black oil sunflower seed, I’ve had endless hours of entertainment sitting on my deck—or even at my strategically positioned computer looking out through the sliding door—watching an endless parade of birds doing what they do. 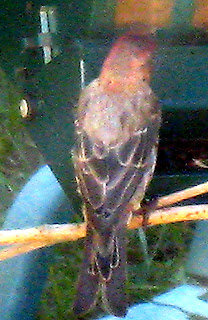 At one moment, a squabble breaks out among a band of house finches. As Roger Tory Peterson, legendary ornithologist and bird book author, says, house finches are “aggressive at the feeder.” A feisty little tufted titmouse nudges a skittish white-breasted nuthatch off the perch: the pecking order at work. 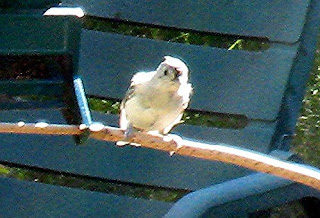 When the oversized grackle with its iridescent black feathers and malevolent yellow eye arrives, all the other birds vanish. He’s the highest on the pecking order of all our visitors, with the possible exception of the red-bellied woodpecker, who’s big and self-confident enough to defend the block of orange-flavored suet. Mourning doves scratch the ground for fallen seed. The reason they’ve been used over and over as a symbol for peace is that they stand outside the pecking order altogether. They ignore the other birds, and none ever try to jostle or chase them away.

Let’s take “bird-brained” as a metaphor for unintelligent or foolish. It certainly fits the little black and white downy woodpecker, which never learns that all it has to do to get the suet is pop into the cage that keeps the squirrels out and dig in. Every time, it starts by perching at the top of the wrought-iron pole from which the suet cage hangs, swivels its head in a series of jerks like C3P0 to check all around, and slides down the pole like a firefighter. It jabs through the bars of the cage, working its way all around, before it finally hops inside and starts to feed. (Imagine yourself clinging to a six-foot block of chocolate and chowing down.) The whole process takes so long that some higher-echelon bird, the raucous blue jay or the persistent catbird, comes along before it gets a single bite. Male or female (Mr. Downy has a blotch of red at the back of his head), one generation after another, they miss a lot of meals because they’re programmed for these lengthy preliminaries.

The feeder birds move faster than my four-year-old granddaughter, which is saying a lot. 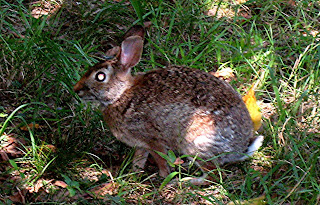 My digital camera did better with the hefty rabbit—a baby bunny just a month ago—and the squirrel. Squirrels are a little smarter. The baffles on our bird feeders—cone-shaped metal collars half way up the pole—work. But every generation or two a thinking squirrel comes along. You’ll see it test the baffle over and over, then retreat to the ground and stare up at the seed beyond, wondering what else it can try. 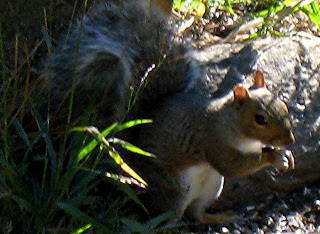 Over the years, we've had visits from possum, raccoon, turtles, chipmunks, field mice, owls, hawks, and so many deer that the deer fence I got to keep them from eating the flowers a couple of years ago is at the top of my list of favorite presents ever. We've had AWOL puppies drop by, and a neighboring cat had her kittens in our crawl space. We've had a bird knock itself out against our sliding door, another get stuck with its head in the tube feeder. To my relief, both of these incidents ended happily, with the bird recovered and flying away. In general, it's nice to share the planet--and the yard--with these lively visitors.
Posted by Elizabeth Zelvin at 3:00 AM

The greatest stress-reliever I know is watching the birds and other wildlife in our yard. I love their innocence and their total involvement in their own personal dramas. If they realized how much effect humans have on their lives, they might all band together and drive us off the planet -- and we might well deserve it.

Liz, I was picturing you in some big New York building with mostly pavement around--these pics look like they were taken in a wilderness retreat!

I saw a hummingbird today for the first time (at least at my house). We don't have a feeder or anything--it was just there hovering by some flowers on my front porch. What a lovely little gift.

Julia, I do live in a big building surrounded by pavement and 24-hour traffic. The back yard with the feeders and animals is our little vacation house on the East End of Long Island. But did you know that New York brownstones have hidden gardens behind them? Our bedroom faces some of those, and I CAN lie in bed in the city and hear, if not see, cardinals and blue jays as well as city pigeons and sparrows.