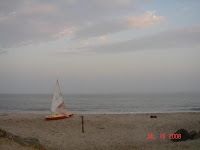 This isn't a post about fiction. It's about real life. About taking a trip to a place so beautiful, it's hard to leave. Particularly when you're leaving one of your children behind, because grown up or not, he's still my baby.

We recently flew out of Nashville to LAX. I'd like to point out, in case you haven't flown lately, that NOTHING so quickly reduces a large group of people (young, old, rich, poor, happy, sad, whatever) to the same level as having to take off your shoes and walk several yards barefoot with a few hundred other people. Sigh. And the airport at LAX is MUCH stricter than the one at Nashville. Whew. But we got there and back. In one piece.

Santa Barbara, CA and the surrounding area is one of the most beautiful places I know. Our youngest son is lucky enough to live and work there. The mountains surrounding the area are almost close enough to the city to reach out and touch. I assumed they would be all black from the recent fire, but they looked reasonably normal. 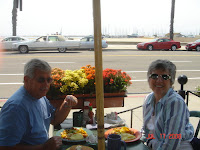 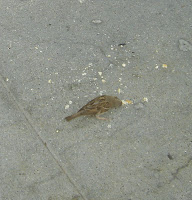 Above, breakfast at one of our favorite places in Santa Barbara, the original Sambo's which opened in 1957. Stearns Wharf and the ocean are across the street. Right: Table for one? This bird perched at my feet to eat scraps.

OCEAN VIEWS: The ocean views are spectacular from any of the beaches. Below left, Goleta Beach. Right, another beach near Stearns Wharf, (note the man parasailing. I was really afraid the sail would get away from him) and below, my fave, an unnamed beach where the elephant seals hang out. Each seal is the size of a small car and they apparently spend a lot of time napping on the beach, growling at each other, or flipping warm sand onto their backs. This particular beach area is fenced off to protect both the seals and the curious humans who visit. The surf here was the highest we saw and I stood and stared for a good half hour without moving. Love this place. 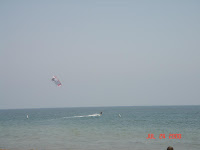 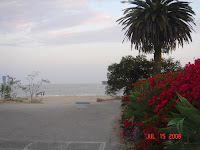 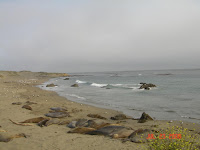 FLOWERS IN BLOOM: We spent one whole day just enjoying the flowers that bloom year around there. Below: first two pictures are of our first stop, the Alice Keck Park in downtown Santa Barbara. Covering one square block, this park has a pond, creeks, ducks, and tons of blooming plants. Very restful spot in the middle of a big city. Then we visited the rose garden at the Santa Barbara Mission (below, center). Many of the rose bushes are the old fashioned kind that still have a wonderful scent. Heaven. Then off to the botanical garden (top right) where we walked for miles and miles. Still, worth the trip. 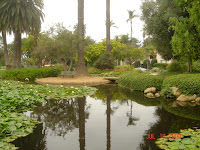 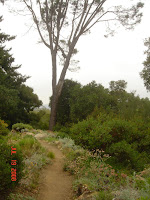 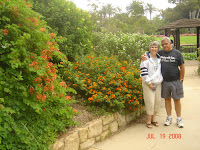 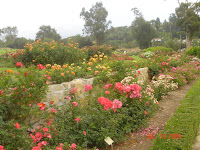 At Stearn Wharf some rather enterprising person placed a large bowl of water on a square of material atop the sand, with an invitation to toss money off the pier (ten feet above the bowl at this part of the peer.) Lots of people took shots at the bowl and a few missed (hence the material to keep the coins from sinking into the sand.) Not a bad way to make money. The ice cream shop at the other end of the wharf has great ice cream. Even the sea gulls agree. 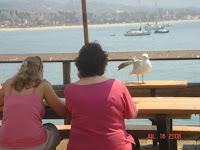 Hearst Castle (2 hours or so north of SB) is huge and absolutely spectacular. If you are ever in the area, take a look. A bit expensive for the tour, but well worth the trip. That said, I wouldn't want to live there. Too big.

(Left pic, flowers at the castle, center, steps to main part of the castle, right, olympic size pool, Johnny Wiesmuller once swam there.) 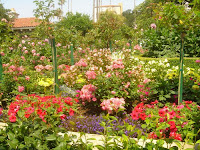 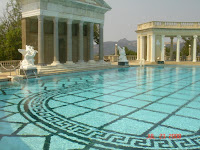 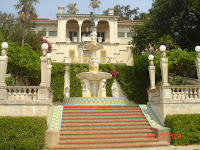 Hubby and our son played golf at a course so high up in the hills surrounding Santa Barbara that you can see the ocean in the distance. Which was lovely except for riding along as a spectator whenever hubby decided to shoot down (or up) a steep hill in the golf cart. Think lift-off in the space shuttle. 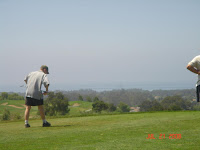 For more flowers with animals thrown in, the Santa Barbara Zoo is the place to go. Just make sure to go in the morning. Afternoon is nap time (theirs and mine) and it's hard to see the animals that way. 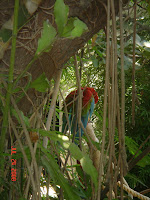 I was able to spend a day with my high school buddy, Sandy. I'm too far away from Las Vegas to make our high school reunion, so this was nearly as good. She updates me on other class mates and we share old memories, like her being with me the night I met my husband, a poor lonely airman, far away from home. Okay, he played the part well. Worked for me. Heheh.

Entering California at ANY part is like entering a different world from the mid-west. Lovely experience. Still, I love living here. But a visit now and then to see the sights, and more important, our son, is a must. 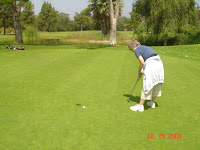 Below: me golfing at a three par course which is more my speed.

IF you've never been to that part of the country, give some thought to taking a trip to the coast of California. The ocean view alone is worth the trip. 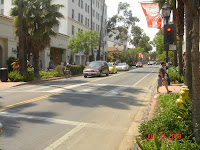 (Right: downtown Santa Barbara where you will see all sorts of travel methods, scates, scate boards, bicycles, cars, pedestrians, and my fave, something called a Segue, which is made up of two wheels with a post in the center upon which one can whip up and down the street.) Far too scary for me. I'd rather walk. They move so fast I wasn't able to get a picture but if you look close, you will see a bicycler, middle left of traffic. Note the bicycle lane on the right of the picture. So many people bicycle around that lanes have been made for them everywhere.
Posted by Lonnie Cruse at 9:00 AM

Sounds like a wonderful trip, Lonnie. The only thing you missed was a visit to the San Diego Zoo to see the beautiful panda family there. :-)

Awww, I forgot about the pandas!

Yes, Santa Barbara is wonderful. So is a lot of California. It's a beautiful state.

On one of your visits you should go north along the coast to San Francisco. It's breathtaking.

We're taking the car north soon. I'll think of you when we go through Santa Barbara.

Lordy, Lonnie, your post made me so "homesick" for California!
Pat Browning

What beautiful pictures, Lonnie! You should get out the camera more often. :)

Pat, I forgot to mention that Don and I also lived in CA about a million years ago. Lovely state, yes. Marilynne, I've been to SF and would love to go again. One of my fave cities.