Don't Go to Dayton in June, Either

This piece was inspired by Rosemary Harris’s guest blog on The Stiletto Gang, “Don’t Go to Dayton in February and Other Lessons Learned on the Road.” Like her, I will start by saying the people in Dayton were wonderful and welcoming to me and my book. The problem for both of us lay in getting there. Rosemary got ice storms. Here’s what happened to me.

My husband and I decided to keep going and see what happened. New York skeptics that we are, we couldn’t quite believe the signs. I was determined to get to West Alexandria, the small town near Dayton where folks were waiting at the library to hear me talk about Death Will Get You Sober. I figured if we got to the bridge and it was indeed out, Sadie would see our plight from her satellite and direct us around it.

“They must have a man at the bridge directing traffic,” my husband said.

“This is the country,” I said. I waved a hand at the fields around us, where the only signs of life were a couple of cows. “I don’t think it works that way out here.”

We kept driving. Beautiful day. Big sky. Rows of corn no bigger than your thumb. No people. Finally we hit a crossroads. The orange sign said, “Detour.” The arrow pointed left.

“She doesn’t know the bridge is out,” I said.

A marital interlude followed. We turned left. At the next intersection, Sadie told us to turn right.

You have to be firm with Sadie. She’s got the view, but we’ve got the wheel. We went straight.

“Recalculating,” Sadie said. One good thing about a GPS is that it doesn’t lose its temper. However, it can be persistent. “In point one miles,” she said, “turn right.”

“She sounds testy,” I said. “She’s still trying to get us back to the bridge. She doesn’t know it’s out.”

Eventually we got on the phone with somebody who could identify the crossroads where we’d pulled up to call. They gave us directions: “Turn left at the stop sign onto Preble County Line Road….” It turned out to be the fifth stop sign, but never mind. We eventually crossed a little bridge in working order over a teeny weeny creek and rolled into West Alex, where I’m glad to say they hadn’t eaten our cheeseburgers. 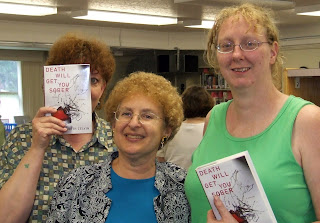 Twin Creek wasn’t always this small, they told us. “You’ve just met Castor,” Suzanne the librarian said. “You should see Castor and Pollux in flood.”

That must be in February, when Rosemary Harris says don’t go to Dayton.
Posted by Elizabeth Zelvin at 3:00 AM

Oh, this is a beautiful adventure! What a riot.

Liz, aren't GPS systems fun? I adore my GPS, well, except when it starts yelling at me to turn around.

We were headed to my daughter-in-law's mother's house last Monday and wanted to go north through Harrisburg, Illinois rather than down to Paducah, KY and then back up to Indiana. The GPS couldn't quite get that concept.

I kept pushing "alternate route" and after I convinced the GPS that we did NOT want to go to the Paducah Police Department (no idea what button I pushed to cause that)the GPS agree to route us through Harrisburg and we cut about 20 minutes off our trip. Whew.

Getting there is half the fun.

Liz
Sounds like it was worth it in the end - nice people, burgers and fries. What could be better.