An Anniversary: Me and My New York Building

Tomorrow, December 21, is an anniversary for me: forty years since I moved into my apartment building on the Upper West Side in Manhattan. 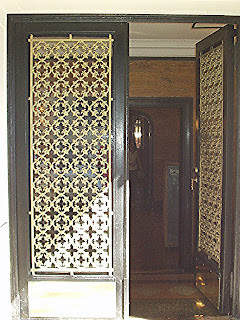 It’s also the anniversary of my long-ago marriage to my first husband. We spent our wedding night in the spacious one-bedroom apartment he’d been renting for $120 a month. The honeymoon consisted of a long weekend knocking out walls so we could expand the kitchen and sweeping up the resulting homosote crumbs. He was that kind of guy.

I remember looking at myself in the lobby mirror as I waited for him to park the car. I thought, This is who I’ll be for the rest of my life. Oy, was I mistaken. I have reinvented myself several times along the way. We changed apartments, to a $190 two-bedroom one floor up and one door over, when my son was born. We got divorced, he moved out, I remarried, my son grew up and moved out too. And the rent, rent control notwithstanding, has gone up and up and up. But until they throw out rent control altogether—as the landlords keep trying to do—I’m not moving out of the building. No way.

Gradually, the old guard has died off or gone to nursing homes. Only a handful are left. The yuppies who move in stay until they find a mate or have a second baby, and then they move on. And the rent goes up again. The apartment next door to me—directly above that first apartment—is vacant. I’ve been watching—and hearing—them sand floors and paint and renovate. The building staff swear they’re not told the rent, but I pounced on a couple of prospective tenants looking it over and asked how much it was going for. My old $120 nest now rents for $2,800 a month.

I’ve been thinking of throwing a party. I’ve thought about sticking a sign up in the elevator or the lobby: “Forty years in the building—time to meet the neighbors.” New Yorkers guard their personal space fiercely. Down the hall from me, the ladies in the D and E apartments, whose doors faced each other, used to chat in their bathrobes and curlers as if the narrow hall were a backyard fence. I don’t think they ever entered each other’s homes.

I say hello to the more longstanding residents in the elevator and on the street. But we never invite them in, nor they us. I probably know more of the building’s dogs by name than the newer tenants. Harry, the aging Sharpei with his worried wrinkly face, is everybody’s favorite. Maybe he’s worrying about the rent going up again and where we’ll all live if they manage to kill rent regulation altogether. Not in Manhattan, I’m afraid.

In the meantime, I love my building with its thick walls and ceilings. Barring the occasional loud party or especially vituperative marital squabble, the only neighbor I’ve heard in forty years was Marmaduke, the Great Dane in the apartment directly overhead. Until we met him, we hated our unseen noisy neighbors. We thought they must be moving furniture every night. But once we knew, our rancor melted: we understood that a Great Dane plays whenever he wants to.
Posted by Elizabeth Zelvin at 9:00 AM

Wow -- $2,800 a month in RENT? That could be the mortgage payment on a nice house. But I realize that big-city dwellers would rather forgo ownership and tax deductions in favor of life at the center of things. Throw a party, Liz. You and your neighbors have love of the city in common, if nothing else.

I love the suburbs, though. A yard of my own with birds and squirrels, a garden, a screened porch. And while suburban neighborhoods may be somewhat friendlier than a NY apartment building, people can still keep to themselves if they choose.

Liz, what a nicely-written post. I must admit, though, that even in the Midwestern suburbs and with several neighbors that I call friends, I rarely invite them inside my house, mostly due to shame at its sloppiness.

But your apartment sounds great, and the door photo is very intriguing.

And yes, Sandra--my mortgage is less than Liz's rent.