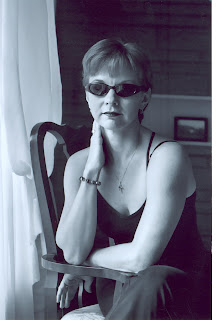 Elizabeth Becka is a CSI and latent print examiner for the Cape Coral Police Department, and the author of Trace Evidence. Her next book, Unknown Means, will be published by Hyperion in February 2008 and deals with a series of apparently impossible murders.

Cops get used to seeing a lot of glass. The term "smash and grab" is still used, and quite literally—most burglars aren't sophisticated enough to pick a deadbolt, when a nice handy brick through the window will do just as well. Then there's the automobile glass, broken in accidents, shattered by gunshots, or just caved in with a baseball bat by someone who decided he doesn't like you.

There are essentially two ways to analyze glass—by the patttern of breakage, or by the composition of the glass itself.

If you take a piece of glass from along the line of a radial crack, the edge will show a series of wavy lines, extending straight from one side of the glass to swoosh along the inside of the other edge, forming a sort of loose L shape. These are called conchoidal fractures. The edge of the glass where the lines are straight (perpendicular) is not the side of the glass that the force came from. This is the forensic scientist's little R rule—radial cracks make right angles to the rear. In a concentric crack, it's the opposite—the chonchoidal fractures DO make a right angle to the side the force came from. This can be vitally important in determining if something was a shoot-out or a shoot-in.

Bullet holes through thick glass will also form a crater, with (as is usually the case in bodies) the larger hole on the side that the bullet exited, and the smaller hole on the side it entered. Higher-velocity bullets will leave a very neat hole. A gun held close to the pane of glass (again, like a human body) will completely shatter it, because the hot gases from the muzzle of the gun escape rapidly and with great pressure. A pane of glass broken with a large stone will look the same.

If you're standing inside and you break a pane of glass, most of the glass will land outside—but some will fly backwards towards you, landing inside the house and depositing tiny shards on your sleeves and clothing.

To analyze the composition of the glass itself, characteristics such as density and color have traditionally been studied. Float glass is created by floating molten glass on molten tin; as a result, one side of the glass will fluoresce. Whether glass is tempered can be determined with a polarizing microscope. I laughed when I saw people on the TV show CSI compare the densities of two pieces of glass by using two test tubes filled with a combination of chemicals to create a density gradient, because this is an extremely old-fashioned technique. It's still quite valid, but very rarely used for the simple reason that glass, these days, is all pretty much the same.

Up one notch from using a density gradient is determining the refractive index of glass by using a microscope and a hot stage. An attachment warms the slide with the piece of glass and a liquid; when the liquid reaches a certain temperature, it and the glass will have the identical refractive index and the glass will seem to disappear. This is a technique guaranteed to ruin your eyesight. After staring at a faint image under a colored filter for so long that you no longer trust your own eyes, well…I could never do it. Most modern labs will have a wonderful machine called a GRIM II which will do this automatically. However—the same qualifications apply. Glass is usually too similar, and while this technique can tell you with certainty if two pieces of glass are different, it cannot be so sure that they are the same.

That takes you to the next stage, the current state of the art in glass analysis -- ICP. This stands for Inductively Coupled Plasma, and it is a large, deceptively simple looking, and very expensive piece of machinery. Very few labs will have equipment like this unless some administrator got liberal with the funding, but your detective could always send the sample out to a larger, more well-equipped lab, which would most likely welcome the submission to justify their expenditure. The ICP can reportedly detail the composition of glass, down to trace elements.

The only other thing I can tell you about glass, from personal experience since I'm always wandering around where hasty burglars have been at work, is that it tends to stick to rubber-soled shoes. A lot.

Posted by Sandra Parshall at 9:45 AM

Thanks for posting, Elizabeth! I enjoyed reading about the glass and how it's examined.

Elizabeth this was fascinating. And I'll be watching CSI with a much more skeptical eye from now on.

You've packed a lot of good information in here, Elizabeth. Thanks for all of it!

I find CSI very entertaining, and I love the characters, but I always watch it with a skeptical eye. It's good to read something that I know is accurate.

This is fantastic, but difficult for us lay people to understand. I'll have to check her website and see if she shows more promise in her explanations there. Frequently guests will not be as clear when blogging because they think they are clear, but the material they've written is actually well-done. Thanks for the post and all the info.

Maybe I've been listening to too much science talk on CSI, but I thought Lisa's explanations were exceptionally clear and easy to understand. Much clearer than most of the forensics books that are supposedly written for laymen!

Well done Becky! After 16 years of walking around smash and grabs you described it perfectly! Glad you are on the blue side...:)

One of the parts I like of this analysis is there are essentially two ways to analyze glass—by the pattern of breakage, or by the composition of the glass itself, and that's what we have to distinguish.m10m