Bestselling thriller writer Alex Kava grew up in rural , the daughter of hardworking parents who believed reading was frivolous unless required for schoo 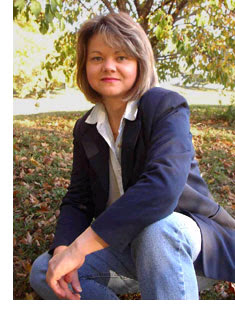 l. She secretly nurtured her love of reading and writing throughout childhood. After college she held a number of jobs, mostly in marketing and advertising, and eventually became director of public relations at her alma mater, the in . When she decided in 1996 to write fiction and try to get published, she quit her PR job, resurrected her small graphic design firm to earn money, maxed out her credit cards, and took on a newspaper delivery route. Her first thriller, A Perfect Evil, was a quick success, and she’s been on bestseller lists ever since. She still lives in , with her dogs Molly and Scout.

Your new book is a departure from your Maggie O’Dell series. Will this become a second series?

Whitewash is not intended to be series, but I never say never. I do love the characters, especially two of the secondary ones: Miss Sadie, the eighty-one-year-old neighbor who keeps cash in the freezer and drives a 1948 Studebaker, and Leon, the hitman who has his own "standards." It'd be fun to bring them back in another novel down the road.

Was it difficult or energizing to work with a new lead character? What were you able to do with Sabrina that might not fit well with Maggie?

I actually find it very energizing. I did another stand alone, One False Move, several years ago. The novel was loosely based on a real life manhunt I found myself caught in the middle of. It was a story I needed and wanted to write but it wasn't necessarily a Maggie O'Dell novel. Same thing with Whitewash. I had a story to tell but I needed someone like Sabrina, not Maggie. Sabrina is a brilliant scientist and professor but a bit naive when it comes to street smarts. The story works because Sabrina hasn't ever had to deal with corporate corruption and political scandal let alone murder. It ratchets up the suspense.

You’ve said that you grew up in a home with few books and that your parents considered reading a waste of time unless it was done for school. Where do you think your love of books and the urge to write came from? Were you encouraged by any adult mentors?

was always a wonderful escape whether I was following around Harriet the Spy or experiencing the high seas with Mutiny on the Bounty. Perhaps it was even more a treat because it was sort of forbidden.

As a child, you wrote stories on the backs of calendars and hid them under your bed. What did you write about, and do you still have any of those stories?

I asked my mom for the old Co-op Grain calendars. They were weeklies, spiral bond and about six inches by nine inches in size, so I had fifty-two blank sheets that I could do whatever I wanted to and no one would miss them or be interested. I wrote stories. I can't remember if any of them were finished. I can't even remember what they were about. And no, unfortunately I don't have them. I think they got tossed for the same reason I thought they were so perfect to use -- no one cared what was written on an out-of-date calendar.

What drew you to writing thrillers? What can you accomplish in a thriller that you can’t in a traditional mystery?I actually didn't choose to write thrillers. My first novel, A Perfect Evil, was loosely based on a couple of crimes that happened in while I worked for a small town newspaper. I didn't know I had written a thriller or a mystery novel. I was concerned about the characters more than the plot. I wanted to focus on what happens to people when something horrific like the murder of two little boys happens in a community, especially a community that sometimes didn't lock its doors in the middle of the afternoon. It was the relationships and transformations of characters and the loss of innocence of a community that I was interested in capturing. Shortly after A Perfect Evil was published a reviewer called me "the newest serial killer lady." Readers all over the world seemed to connect with Maggie O'Dell (who, by the way, doesn't enter the novel until chapter seven) and suddenly my publisher wanted a series of thrillers with Maggie O'Dell. At that time I couldn't even tell you what a thriller was and I certainly didn't know the first thing about writing a series. Even now I don't necessarily concern myself with whether the novel is a thriller or a mystery as much as how I want to tell the story and who -- which set of characters -- will tell their version.

How do people who have known you all your life react to your choice of subject matter? Has anyone ever tried to talk you into writing about more pleasant subjects?

My mom, who is a good Catholic mother, reads all my novels but we never discuss them. By now most of my friends are almost as fascinated by my research as I am. Although I'm not sure if that says more about their acceptance of me or their own dark interests.

What aspects of your writing have you consciously worked to improve? What aspects give you the most satisfaction?

I'm constantly working to improve every aspect -- to write tighter, to use more concise description, to make the dialogue sound real, to flesh out even the secondary characters and include research that enhances, not bores, the reader.
It seems to be the oddest of things that give me the most satisfaction. But mostly it's when something I've written really touches a reader. For At the Stroke of Madness I gave one of my characters Alzheimer's Disease as sort of a personality quirk until I started doing my research and realized what a horribly sad disease it is. Luc Racine became an important character in the plot and so did his loss of memory. Recently a reader, whose own father suffers from Alzheimer's Disease, wrote to me and thanked me for portraying the disease in such a realistic manner right down to Luc Racine finding his TV remote control in his refrigerator.

Does anyone read and comment on your work before you turn it in to your editor?

Yes, my friend and business manager, Deb Carlin, reads it. Oftentimes she takes my longhand and keys it in for me, too. She's also the only person I sit and brainstorm with to figure out the twists and turns.

How do you divide your time among research, promotion, and writing? Do you attend any mystery conferences?

It's tough because a writer could literally spend all year doing research, promotion and going to conferences and not writing. For example in 2006 I spent five weeks on the road doing an 18-city national tour for A Necessary Evil. Then because One False Move was chosen for One Book One Nebraska I decided to do a six-week, 35-city library tour across the state. For 17 days it was three women and five dogs in a rented RV. We jokingly called it "The Insanity Tour." Also in 2006 I attended three national conferences, BEA, and four book festivals.

I know some writers who can write anywhere, but I find it impossible to write in airports, hotels and RVs. Yet all of it is important, so you find a way to juggle it.

What do you read for pleasure? What thriller writers do you admire, and what newcomers to the field have caught your attention?

I just finished reading Daniel Silva's The Secret Servant. Now I'm reading Kathy Reichs. I love Carl Hiaasen and Thomas Perry. I've been a judge and the Awards Chair for International Thriller Writers so I've had the honor of meeting quite a few authors in the last two years, and now I'm enjoying reading many of their works: Joseph Finder, P.J. Parrish, Lee Child, Tess Gerritsen, Christopher Riech, Steve Berry, Jeffery Deaver, James Rollins . . . so many books and so little time.

There are too many thriller authors I admire to mention. For newcomers, I just finished George D. Shuman's second thriller, Last Breath, which was terrific.The character of Sherry Moore that he created in his debut, 18 Seconds is a fascinating character. And for me that's still what makes a good thriller -- just as in any great fiction -- it's the characters.

You’ve had an extraordinary degree of cooperation from the FBI, while some other writers have said they were rebuffed when they asked for help. Why do you think the Bureau has been willing to assist you?

All of my resource connections in law enforcement, including the FBI, have come about through friends and/or readers helping me make those connections. Several of my sources have come to me at national book signing events and offered their assistance with a private phone number and/or email address. I've never had to cold-call anyone. I've been very fortunate.

But once I make those connections I think the sources are willing to talk to me because they know how much I respect what they do and they can trust me. There have been several times that I've had sources sit down and talk to me about open cases, including evidence that hasn't been made public, and they know they can count on me to not divulge anything sensitive. People resources are the absolute best for any research and what they share gives my novels a level of credibility and authenticity that I couldn't get anywhere else.

What are you working on now?

I'm working on the next Maggie O'Dell, called Exposed.

Posted by Sandra Parshall at 9:45 AM

Wow, love the interview. I was fortunate to be encouraged in a love of reading by my step-mother, who was also a teacher. Your story of wrting on calendars is very moving.