What's Up With That House? 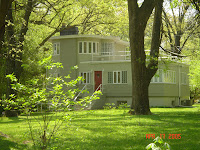 Anybody watched that show on HGTV? I've seen it a few times, and the houses they feature ARE pretty weird. The picture on the right is one I took in a nearby town several years ago. If you look closely, you'll see it's shaped like a tow boat. I presume the owner worked on a tow boat for most of his/her life. I've always liked this house, and I'd love to see what it looks like on the inside. And whenever I pass an odd house, particularly an old, abandoned one, I find myself wondering about the people who built it and lived in it. Who were they? What were they like? And, sometimes, why was the house abandoned to gradually fall into ruin?

Which brings me to the subject of today's blog . . . INSPIRATION!


Lots of authors take pictures of people, places, or things that inspire a story line. Then we post them on some sort of bulletin board near our desks so we can stare at those pictures rather than at THE BLANK PAGE when our current story line screams to a halt. And stare, and stare. But having a picture of someone who represents a character, or a place where we're setting the scene, or a particular object, (Machine gun, anyone? Bloody knife?) is an excellent way for a writer to visualize what we're writing without having to give the reader a description that is soooo detailed, the reader falls asleep halfway through, just to make sure we've covered all the bases. And readers are very vocal about the fact that they like to visualize some things in our books for themselves: how a character looks, or a place, things like that. Too much information from an author is . . . um . . . well . . . too much information. 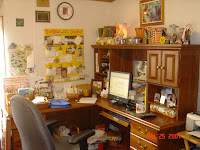 My particular "bulletin board" is pictured to the right. It's an antique message board from a mollasses company, and I love that thing. Holds tons of inspiration. 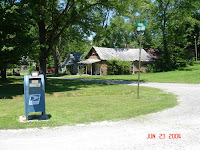 One of the things I love most about my fellow writers is that we seldom have the SAME vision. You can give a group of writers a picture, a paragraph, a sentence, or a word, and tell them to write about it, and rarely will two have the same take on it. Or should I say take off? As in letting the fingers fly and the story tell itself? Variety, something readers crave and writers strive for. Which makes me wonder: What kind of story would you write about the house in the picture to the right? Hmmmm? I found this one while bike riding on a wonderful trail near Tunnel Hill, IL.

So if you are lacking inspiration, take a camera with you everywhere, and snap photos of whatever captures your attention. I once took pictures of Kudzu covering an object so thoroughly that I couldn't tell exactly what WAS underneath the heavy growth. That lead to an article that appeared in a newsletter. Inspire yourself with pictures, and write, write, write.


Okay, I've gotta quit playing around on here and get my character out of the latest mess I've written him into. But it's such a pretty day, maybe I'll . . . .
Posted by Lonnie Cruse at 9:55 AM

Great photos, Lonnie! Your office looks like mine: cluttered and beloved.

Every picture of a writer's office I've seen is cluttered. Must be in our genes.