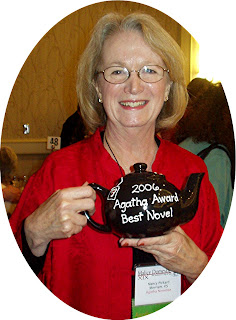 Have you always been a writer? Have you had day jobs or always made your living as a novelist? Have you put any other dreams aside for writing?

I've always been a writer, though I was not one of those precocious children who wrote a novel at age 12. I graduated from journalism school at the University of Missouri and then held day jobs until I was about 35, at which time I plunged fulltime, right from Day One, into being a novelist. Other dreams? You mean like paying the mortgage? lol. Yes, I've put aside some dreams, but none of them lured me on as writing has done.

I first discovered your work when I read and loved the first Jenny Cain mystery, GENEROUS DEATH. What prompted you to pick a charitable foundation as the focus of your mystery series. Did you plan a series when you wrote the first one? And why mystery?

Thank you! I picked a charitable foundation because I decided that where there's death and money, there's the opportunity for foul play. I wasn't thinking of a series until after Generous Death was published and I heard from readers that they wanted more of it. Mystery? Because it was the form of the novel with which I was the most familiar, and because I was a Nancy Drew girl.

One of the things that makes Jenny Cain interesting is that she comes from quite a dysfunctional family, including a father who’s a terrible liability. Where did they come from? Did the Cains grow out of a germ of reality or a “what if”?

I still don't know where they came from. Honest. I don't have a sister, my mother is extremely sane, and my father was spacy only in the sweetest, kindest way.

How did it feel to let go of Jenny and move on to another series? How did the process of launching a multi-book story arc differ the second time around? What had you learned that made it easier—or harder? Or simply different?

It felt okay, because she seemed to have done all she wanted to do by then. It was just a feeling that the time was right for her and for me. When I started the Marie Lightfoot series I knew from the start that it would be a trilogy, because I wanted to do other things after that. I learned so much from the Jenny books! It's almost impossible to start listing them, so I'll just settle for saying that I learned how to write novels.

How did you come to write the cooking mysteries based on the late Virginia Rich’s work? What did you expect when you decided to do this, and did it turn out the way you expected, or were there surprises?

I was asked by her editor, with the approval of her widower, to take up the series. I had been a fan and had even very briefly corresponded with her, so that just felt right, too. It didn't turn out as I expected--it was much, much harder. The biggest--and nicest--surprise was discovering how "older women" welcomed a sleuth who was still alive and kicking in every way, including love. Now I'm almost as old as Eugenia Potter, and I wish I'd made her seem even younger!

How do you write? Do you have routines or rituals? Do you outline beforehand, and if so, do you stick to the outline? How much do you revise? Who reads or critiques your work before it takes its final form?

I write by the seat of my pants. I have no rituals, unless multiple cups of coffee counts, which I suppose it does. I can write almost anywhere, at almost any time of day. I write a proposal in order to go to contract, and then I mostly ignore my own proposal and let the book develop as it will. I revise constantly. With short stories, I ask writer friends to read them before I submit them. I used to do the same with my novels. But now I have so many readers at Ballantine--my editor, Linda Marrow, plus two other editors who help her, and other people at the publishing house--that I just let them tell me everything I need to know. It's a great editorial team, and I'm grateful.

Along with the novels, your short stories are widely admired, especially “Afraid All the Time” and “There Is No Crime on Easter Island.” Do you have any stories to tell about the writing of these or readers’ response to them?

A couple of things--one, it is true that sometimes readers will find our novels because they've read a short story they liked. And two--I had to learn that every short story needs an epiphany--an ah ha moment for a character or for the reader--before it will work.

Have you had mentors? Who has inspired and/or helped you along the way?

I've been inspired by and helped by so many people, including mystery writers. My senior high school English teacher, Nina Mackey, always comes to mind. And there was a novelist, Alice Winter, who was a mentor for several years.

What was it like being one of the founding mothers of Sisters in Crime? How do you think women mystery writers are faring 20 years later? What still needs to be done?

It was exciting, it was scary, it was fun. We were so lucky to be part of that, as is anybody who gets in on the ground floor of a revolution that actually leads to good things. As for how we're faring now, to tell you the truth, I'm not sure. Certainly, we're an established part of the scene. Are we getting equal treatment in terms of money, reviews, advertising, etc.? I don't know. I, personally, feel fairly treated, but there seems to be some evidence that some things have not changed all that much for the better.

You’ve just won the Agatha for Best Novel for your standalone, THE VIRGIN OF SMALL PLAINS. Did you know when you wrote it that this was something special?

I only knew it was special to me, because it was the culmination of a lot of years of work and learning, and because it allowed me to write the kind of book, starring the kind of people, I'd been wanting to write.

You’ve won several Agathas over the years and many other awards? Is any of them especially meaningful to you, and why?

Out of my four teapots, the one I just won for Virgin probably means the most, because it was a welcome back after years of hibernation while I was working on improving my writing. It was an affirmation that I was on the right track. But I was thrilled to get the first one, for Bum Steer, and thrilled to win one the very next year, for I.O.U., and the one I won for a short story, "Out of Africa," meant a lot, because I particularly loved that story.

THE VIRGIN OF SMALL PLAINS is set in a part of Kansas most of us don’t know exists, as was the Jenny Cain book BUM STEER. The first time we met, I mentioned that BUM STEER was my favorite in the series, and you said it was yours too. Would you care to comment on that—on Kansas, on the importance of setting, and/or on writing about home?

I've been so slow to come home to Kansas, in terms of my novels. And now it's so important to me. I love so many of the landscapes of this state, and I know so many wonderful people here, that it gives me tremendous pleasure to bust a few stereotypes about it when I get the chance.

Do you have any words of wisdom for writers starting out today—both young ones and those of us who have had a long journey to the point of first publication?

This may seem an odd, even discouraging piece of advice, but I promise you it's a good one: in the phrase, "professional writer," the word professional is as important as the word writer. "Professional". . .like doctors are professionals, and lawyers, and everybody else who takes many years and makes sacrifices and goes through hard times to reach their goal. They say it takes l0 years to become good at anything, and I think it's helpful to remember that's applicable to writing. That's ten years of writing, writing, writing, maybe without being published during that time. That's years of focusing on the writing, not on the publishing, though there will certainly be dreams of that. It's keeping the horse of writing in front of the cart of publishing, where they both belong. Starting writers, apprentice writers, master writers, all can benefit from being patient with themselves and the process. It's a long process. A lifetime. Go easy on yourself and give your dreams plenty of time to develop fully. Even if you're 80 years old. In ten years, you'll be 90, and not only is there nothing wrong with being published for the first time at 90, trust me, it will get you good publicity!
Posted by Elizabeth Zelvin at 10:00 AM

Nancy, thanks for the wonderful interview and that last piece of advice, which is really good.

I bought Nancy's book on writing after meeting her at GMMC a couple of years ago. Great writing advice!

Hi, Julia and Lonnie! Thank YOU.