Singing and Signing at Barnes and Noble 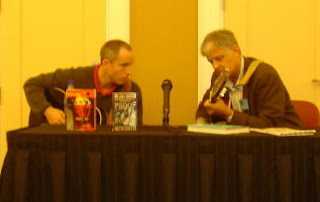 Author Parnell Hall wrote (and performs at the drop of the proverbial hat) a song about himself signing books at Barnes and Noble and nobody came. In one verse he mentions being seated next to a certain famous author for another signing and her line of eager readers winds clear out the front door. Any author who's ever done a book signing has experienced first hand the pain expressed in Parnell's plaintive but hilarious tune.

Sitting at a book store for a couple of hours, trying to entice passersby to stop passing by and buy a book is nothing short of exhausting. Digging ditches is by far easier. Not to mention the pay is better. And we authors have to resort to all sorts of schemes to attract attention, including but not limited to: wearing strange clothing, supplying various giveaways, free food, weird table decorations, and when all else fails, a head-on confrontation, as in leaping up from our seat to chase down a prospect with a hearty "Hello, my name is . . . and I'm here today . . . ." Trust me this job isn't for sissies. And it isn't for the shy.

Authors generally sit in solitude to write (with the possible exception of the aforementioned Parnell Hall, who claims he writes in his underwear . . .at Starbucks) so we get used to being alone with our characters. Then the book gets published and we have to go out into the big bad world and sell as many copies of it as we can in order to stay published. Picture a pan handler sitting on a sidewalk, rattling a metal tin, begging for money, and you pretty much get what the author is experiencing. And we try, really we do, not to throw ourselves at the buyer's feet and grovel in appreciation.

So why do we do it? If it's so difficult? Because we have a story to tell and we want others to read it. Or because we're gluttons for punishment? The good news is, books are like fast food, and one burger doesn't last forever. So readers, upon consuming one book, will be looking for another, and then another. And if the reader likes the first in our series, chances are the second, and third, and so on will sell.

Of course it's hard for us, as authors, to accept that there are readers out there who won't like our particular work but will love someone elses. How dare they? But we keep writing, for those who DO love our work. And we try each time to raise the bar a bit higher, for ourselves and for our readers. All the while setting up signings at bookstores and hoping the books arrive on time. And that we've baked enough cookies.

Is there a point to this blog post? Probably not. Except I do want to mention that of all the chain stores in the world, Barnes and Noble have been the best about getting my books for signings and they never seat me by the bathrooms.

I used to work at Barnes and Noble! I was fiction manager. I haven't tried to get a signing there, but maybe I should. :)

I would think Parnell's guitar would help sell lots of books. Maybe Poe's Daughters should also become a rock group.

Hehehe, if you've never heard Parnell sing, you've missed a treat! Yes, do set up a signing at B&N! And should we be a rock group? Why not?

If you'll settle for folk, I've got the guitar. Backup harmonies, anyone? Fiddle? Banjo? I'm just back from a standing-room-only signing by Donna Leon at the Barnes and Noble near Lincoln Center. This world-class mystery writer may pack 'em in now, but for many years she didn't have an American publisher in spite of her many fans, who had to pay British-import prices to read her work. She was well worth hearing,holding forth at length about how an unexpected character has "kidnapped" her new book and the crisis--no kidding--in Italian garbage.