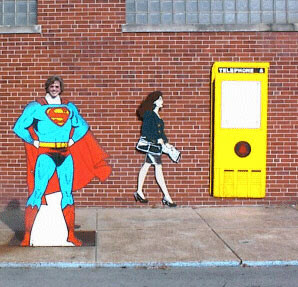 
Picture on left is the side of the Super Museum with a fake telephone booth. And yes, that's me posing as a super hero. Anything for the camera.

It's a wonder to me that everyone, including me, doesn't have missing, or at the very least, mangled ears from constantly holding a cell phone against the sides of our heads. I even know people who have the kind that actually hook ONTO the ear, like a hearing aide, so they walk around looking like they have a huge black roach attached to their ears. Ewww.

Practically ever single person shopping in the huge discount stores or grocery stores are chatting to someone. It's like we can't go for five minutes without conversation. Anywhere. I felt really sorry for an older lady I spotted in a restaurant a while back, eating her dinner in silence because her younger male companion chatted on the phone from the time they arrived, throughout the meal, and was still at it as we left. I'm assuming he was her son, but it struck me as a bit rude. Couldn't he chat with HER through the meal and call the person back when he was alone? Sigh.

Of course, I'm a child of the 50's and our home phone back then was firmly attached to the wall in the dining room which was right behind and fully open to the living room. So my parents could hear every single word. And that did get me into trouble, more than once. When hubby and I got our first house, in the 60's, our phone was in the kitchen, with possibly the longest cord in history, which allowed me to work in the kitchen and even reach part of the living room to sit down and chat. Of course, our sons always got *just out of reach* of the cord, so while I could threaten, I couldn't actually touch them while they wrestled each other or bounced on the couch. Luckily, it was vinyl. Where was I?

Growing up, I never dreamed of cordless phones, much less cell phones which gave users the ability to talk in the grocery store OR the car, while on a trip. I do love that. I confess, though, I once put the cordless phone down and couldn't find it. Pressed the handy little locater button, but no sound to lead me to it. Then I looked out the window. I'd left the receiver on top of the dog's house when I fed her. She didn't bother to answer the phone. Probably knew the call wasn't for her.

Last Tuesday was sort of the "be all, end all" cell phone spotting for me. We took our grandsons to the waterfall at Ferne Clyffe State Park (Southern Illinois, if you are ever in our area, check it out.) The boys climbed around, over, and under the rocks while Grandpa supervised from a safe distance and I sat on a nearby bench and enjoyed a good book and the lovely scenery. From time to time other visitors sauntered up to where we were, admiring the scenery. One group of teens included a young man chatting on his cell phone, informing the listener that he was at the waterfall. Which tells me there is now no place that is cell phone free except certain hospital areas, and people have been known to sneak them in there. And where was my cell phone while we admired the flora and fauna at Ferne Clyffe, you ask? In my pocket, of course! You didn't think I was dumb enough to take a hike in the woods without it, did you?

But I do have to wonder what kind of society we've evolved into, when you rarely see anyone without a cell phone tucked into the ear and/or between ear and shoulder while people go about their daily business. And whether or not the next generation will still have two ears and/or be able to stand fully upright, with ear not attached to shoulder permenantly. Should be interesting to see. And cell phones have given multitudinous writers ideas for stories. I'm sure there are plenty more out there.

'Scuse me, my cell phone is ringing. That would be the new one the company just sent me that takes pictures and has some sort of direction finder, for when I get lost. Have a good day. And don't forget to charge your cell phone.
Posted by Lonnie Cruse at 9:58 AM

I don't have a cell phone, and I do find it irritating that so many people walk the streets with them pasted on their heads. What happened to the notion of thinking while walking? Reflecting while alone in the car? And who are all these people TALKING to?

The worst offense I've seen is when a young parent, male or female, takes a little child to a restaurant and then spends the entire meal talking on the phone. So much for that quality daddy/daughter time, or mother/son time. The kid has to sit there and eat alone. Drives me crazy.

I absolutely hate cell phones. Hate people walking around in public talking on themm, hate seeing drivers talk on them in traffic, hate having to use one myself. They're good to have along in case you have an accident or need help for some other reason -- and I'm sure lives have been saved because motorists were able to call for help quickly when they witnessed an accident -- but I can't see myself ever becoming fanatically attached to one.

The internet and e-mail, however -- that's a different story. I spend far too much time on both.

The most curious sighting for me was two men eating in a restaurant, both on their cell phones. Were they so in love with their new phones that they were talking to each other on them? Or we they really taking to other people. If they were talking with other people, why were they having dinner together? Makes no sense, does it? But, good writing material, for sure.

I thought I was the only person left in the US of A that did not have a cell phone. I'll admit, there are times when I'm running late or lost that being able to call for help might be nice, but how often does that happen? Once a year? One of my pet peeves is trying to enjoy a nice meal and sitting at a table beside a man (because it usually is) who is talking business to someone in China (must be, otherwise why is he talking so friggin' loud?)I've been known to ask to change tables. It's almost as bad as sitting next to a smoker--hey, we got that banned from restaurants. Can cell phones be next?

I navigated here to read Tony's distribution lesson. Very good. It amazes me that anyone other than the distributor(s) make any $ selling books! But I was going to comment on cell phones. I'd call 'em a necessary evil these days! We use 'pay as you go', got fed up with inflexible contracts.
See you in Nashville in August.
Sylvia

I feel like I've come home. I keep hoping cell phones are a passing fad, but I suspect I'm Wrong. Lonnie, I spent many hours at Ferne Clyffe State Park when I was a student at SIU in the late 60s. Beautiful!

Thanks for stopping by and sorry to be slow responding. If you read Julia's Sunday blog post, you know we both sneaked off to spend part of the weekend at Schaumburg for the Author Fest. I really appreciate your comments! Glad I'm not the only one with a love/hate relationship with my cell phone!