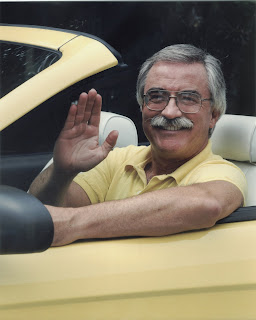 Let’s start with the question you posed in the flier you handed out at the workshop on thrillers that you moderated at the recent MWA Symposium during Edgars Week 2007 in New York. Your question: “What does a guy who has been a sheriff’s officer, Military Police lieutenant, trial attorney, and law professor—affectionately known to his students as the Prince of (expletive-deleted) Darkness—do for excitement?"

For excitement: kayaking, distance swimming, scuba diving, fly-casting, sailing, tennis, jogging, and walking late at night through Boston Common (think NYC's Central Park) simulating a limp to see if any bad guys would jump a person with an obvious disability.

What prompted you to become a fiction writer?

As a trial attorney and law professor, I became frustrated by the (thankfully, relatively few) ways in which the formal judicial system, civil or criminal, does NOT handle certain types of cases well (the battered spouse in the otherwise financially secure family, a reporter’s privilege not to reveal confidential sources, etc.). By writing fiction, and especially crime fiction, I could explore those “fall through the cracks” kinds of cases.

At what point did you stop juggling your law and writing careers and become a full time writer?

In 1995. It was not so much that writing crime novels conflicted with teaching law students, as that the promotional obligations to the publisher(s) became difficult to balance with the administrative conferences I was (reasonably) expected to attend as a tenured professor.

You have written 18 novels and more than 60 short stories. What are your work habits? Do you have a routine or any rituals? Or are you just one of those guys who only needs three hours of sleep?

Actually, I prefer a LOT of sleep. I've found that, in terms of creative writing, I'm best off writing almost every day in the morning, having lunch alone, and then going out into the "real" world to play tennis, work-out, even just ride the subway: ANYthing that is NOT sitting alone in a little room creating a fantasy world via the keyboard.

You have two ongoing series, the John Francis Cuddy PI novels and the Mairead O’Clare legal thriller series that you write as Terry Devane. We can assume the pace at which you write those books is dictated by your contracts. But you’ve also written stand-alones and all those short stories. How do you decide what to write next?

When I first considered becoming a FULL time writer, I asked friends who had been one for years their thoughts, given the glory of hindsight, on what they might have done differently. Lawrence Block told me: "I wish I'd written next the next book I wanted to write, rather than play to the money." I think that's great advice.

Do you have a favorite protagonist (Cuddy or O’Clare), subgenre (PI or legal thriller), or format (novel or short story)? Or do you love all your literary children equally?

Well, I'd say I love them all, but if they WERE children, and the oxygen mask on the plane dropped down, which "child" would I help first? Cuddy, because he's been such a big part of my writing life.

You’ve been honored many times as a writer, including 16 wins or nominations for the Shamus Award. Does one of those awards or honors stand out as particularly meaningful to you?

Two. I won the Shamus Award for Best Hardcover Private Eye Novel of 1986, and that kind of launched me. Also, being honored as the American Guest of Honour [stet] at Al Navis's Bouchercon in Toronto during October, 2004, is the other.

You have written very frankly about your prostate cancer in a way that comes across as a deep commitment to helping other men get the information they need for diagnosis and effective treatment, not just on a medical level but in terms of practical advice and plain speaking about what it’s like to make this journey and how to get through it whole. What has it been like for you to make these experiences public?

I've always believed that if life gives you lemons, make lemonade. I couldn't pay back the men who'd counseled me through my prostate cancer experience, but I could pay it forward to others by doing that article and some speeches about it.

What’s up next for Jeremiah Healy—and Terry Devane?

What are your goals or dreams for the future? What’s still out there that you’ve never done?

While I've had some of my fiction optioned for film, I'd love to see one of my novels actually adapted to the big or small screen, and I'd also love to have one of my original screenplays optioned for Hollywood.
Posted by Elizabeth Zelvin at 10:00 AM

Wow, terrific interview, Liz. Mr. Healy, (curtsying politely in your direction) I hope to meet you in person some time, and thanks for sharing with Poe's Deadly Daughters!

That was a terrific peice -

I met Prof Healy first in 2003 when he ran a writing course, at Bouchercon Las Vegas, which was excellent - his work both as Healy and Devane is exceptional - and as a person, he is a gentleman.

I said hello briefly at Thrillerfest last summer and hope to have a beer with him this summer in NY - if you've not read his work - you're in for some dark treats.