A Canadian in the U.S.: My Love Letter to Michigan

By Victoria HamiltonAuthor of A Deadly Grind 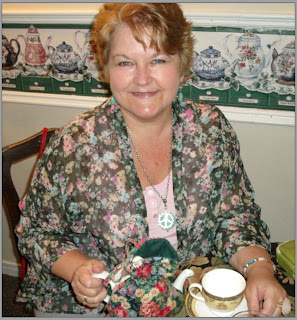 “Nobody in the States would buy a mystery set in Canada.”That’s always been the prevailing wisdom, as far as the mystery publishing world has gone. Most Canadian mystery writers with ambitions beyond our border have caved, and set their books in the United States.

Of course, Louise Penny (and some notable others) have blown that theory out of the water; Ms. Penny’s Quebec-set Chief Inspector Gamache mysteries are making rather nice headway on the New York Times bestseller list, and for good reason. Her writing is, of course, excellent, and Canada is a rich, beautiful, fascinating country, with a wealth of great locations for mystery novels.But I’m one of those who decided to flow with the stream, so I set my Vintage Kitchen Mysteries (#1, A Deadly Grind, came out May 1 from Berkley Prime Crime) in the United States, Michigan to be exact. Close enough that it feels much like home to me, but in another country, so it feels just a shade exotic. I know Michiganders (58% of those who reside in Michigan prefer ‘Michigander’ over ‘Michiganian’ as a demonym… did you know that?) are going to laugh. Exotic? Michigan??A little background on why this is so for me: I live in Southwestern Ontario, a part of Canada that looks, on a map, as if it is a spoon thrust down into the jam pot that is the United States of America. Growing up, I spent a lot of time on the Ontario shores of Lake Huron at a provincial park, camping. All around me were campers from Ohio, New York, but mostly, Michigan. The old-style Michigan license plates, white lettering on a blue field, was opposite the Ontario plates, blue lettering on a white field, and you’d see about an equal mix of both in the parking lots and on camp sites. And the American kids were the coolest! They wore the neatest clothes, had the best stuff, and radios everywhere, in that lakeside campground, were tuned to CKLW, a Windsor/Detroit station that played nothing but Motown. To this day, when I hear the O’Jays or the Stylistics it takes me back to the smell of lake water and tanning lotion, and the sound of waves and gulls.

So when I was pondering where to set my Vintage Kitchen Mysteries, Michigan was an easy choice. A natural choice. A great choice! That state has taken a lot of hits in the Motor City belt in the last few years, but Michiganders will come out of it just fine.I invented a town called Queensville, across the St. Clair River from a fictional Ontario town, Johnsonville, with a divided island in the middle called Heartbreak Island. I created a fictional history that highlighted the cooperation and love between such close neighbors. We may disagree from time to time, but Canada and the U.S. set a gold standard for international friendship that I feel can’t be matched.And so I have been greatly flattered by the many letters and reviews that have named Queensville, Michigan, as a place folks would like to visit. I’ve received more than one letter asking me if it’s real. Well, yes, it is real, in my mind, and in the lives of the characters I’ve created who love their town, and their state. 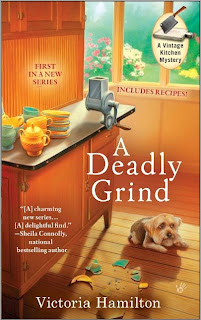 I’m endlessly interested in the towns and cities that make up the fictional landscape, from Cleo Coyle’s wonderful real life Village setting in her Coffeehouse mysteries, to quaint Elderberry Bay, Pennsylvania, home of Janet Bolin’s ‘Threadville’ sewing mysteries; the United States is dotted with crime-ridden cozy towns. For other mystery writers I wonder… why do you set your series where you did? Did you make up a town? Did you use a real city? How have readers reaction?And for readers of mysteries, how important is the setting of the mysteries you read? Do you mind the ‘Cabot Cove’ syndrome, small fictional villages with an ever decreasing population and an ever increasing crime wave? I’d be interested to hear!                                        ~::~Victoria Hamilton writes her Vintage Kitchen Mysteries out of a small Southwestern Ontario city, but hopes that her fictional town of Queensville, Michigan feels like Anywhere, USA. Book 1, A Deadly Grind came out May 1, and Book 2, Bowled Over will be released March 5, 2013.Visit her website at http://www.victoriahamiltonmysteries.com/ Victoria Twitters at: @MysteryVictoriaVictoria’s characters blog at Killer Characters on the 21st of each month.
Posted by Sandra Parshall at 3:00 AM

Victoria's new series sounds wonderful to me, especially since I love vintage kitchen stuff. (I still use my grandmother's old nut grinder!) A Deadly Grind is going on my "to buy" list.

I've heard that people in the US won't buy a book set in Canada and I think that's just silly. Maybe I feel that way since I live in WNY. I grew up in Buffalo, NY and went to college in Niagara Falls, NY...both border towns. Personally I love settings with which I'm familiar, but I also like to explore new places by reading. I enjoy fictional towns as much as real ones...sometimes more so, as I can't find errors in a place that doesn't truly exist. I'd actually be more tempted to buy a mystery set in Toronto, Canada, than New York City as I'm familiar with, and love, Toronto while I have never actually been to NYC! I've already purchased my copy of A Deadly Grind...but haven't had a chance to read it yet.

I used to live in lower Michigan (if you had a mitten, I'd show you where), so your series sounds delightful to me. Michigander is definitely the way to go, by the way. I'd never heard of a Michiganian before.

First of all, Victoria, welcome to the mystery world. My tastes in setting generally tend to be small towns rather than big cities, but I would not discount a Canadian town versus a U.S. one at all. From the info on your website, A DEADLY GRIND sounds like it's character driven with two sisters at the helm. I'm eager to see how they make their discoveries and what troubles they get into. My book also has two sisters as protagonists. Good luck and much success!

Thank you for being our guest this weekend, Victoria. I hereby declare you an honorary U.S. citizen, and you'll no doubt gain a lot of fans in Michigan who will want to adopt you into their families. I hope I'll see you at Malice Domestic next spring, if not before.

Thanks, all for the great comments! I am honoured (notice the 'u'!!) to be an honorary US citizen, but it's a good thing the IRS considers me to be a 'non-resident alien', or I'd be paying two sets of taxes!!

I'm a Michigander and it would never occur to me NOT to read Canadian authors/settings! We visited Canada regularly when I was kid and it was just like visiting a neighbor, not foreign at all. Weird.

I loved A Deadly Grind and am looking forward to more in the series. I like mysteries set in small towns and many authors seem to avoid the "Cabot Cove Syndrome" by giving their character a reason to have contact with the police, a PI, or a crime reporter.

For the difference between Michigander and Michiganian, refer to Wikipedia: http://en.wikipedia.org/wiki/Michigander. Those of us who grew up here don't consider Michigander a pejorative. Some newcomers do.