Why Writers Should Watch Stephen Colbert 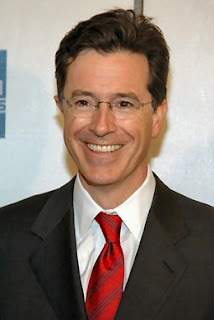 There are times when I despair that things in television are being too “dumbed down,” especially the things that are meant to entertain (and sometimes educate) my children. I grow tired not only of scripts that contain too many stock characters, cliché situations, or predictable plots (oh, how very predictable many have become)!

I cringe at the notion of “reality tv,” which I find not realistic at all if by realistic they mean authentic. And the huge burst of reality programs suggests that not only is television trying to create a nation of voyeurs, but that network after network wants to jump on that bizarre bandwagon.

Colbert’s show, The Colbert Report (whimsically pronounced COL-BAIR RE-PORE) is political, satirical, and ironic (he poses as an extremely conservative American), and I appreciate all of those facets, but they are not the reasons why I feel grateful to Colbert. My gratitude stems from the fact that Colbert loves words, and he uses them effectively, hilariously, wielding them as weapons of protest, as swords of debate, as reminders of the broad vocabulary at our disposal.

The opening sequence of the show, aside from showing Colbert literally waving the American flag (hence the ironic tag), presents a visual of Colbert remaining stationary while a slew of words scrolls past his head—words that are humorously supposed to describe Colbert himself, at least in his televised persona. Every now and then a word is selected to remain onscreen; one of the funniest I recall is “gutly.” My personal favorite is “Lincolnish.”

Colbert has fun with words; writers understand this, and first and foremost I view Colbert as a writer. His show was spawned by The Jon Stewart Show, and Stewart is perhaps the king of political satire in this venue. But while Stewart is great at improvisation and cutting edge satire, Colbert is a good writer and speaker. Sure, he has a team of writers at his disposal, but I believe that Colbert, as a lover of words, is much involved in the writing of the show (I base this on his quick wit in interviews, much of which must necessarily be improvised depending on his subject’s responses).

Why are words so important? Unless television begins to challenge our minds and make us think about words, concepts, ideas beyond platitudes and clichés, we will no longer want to read or think at deep levels.  We will want only to be entertained (both Stewart and Colbert reach people, after all, by making them laugh), and if the powers behind the networks chip away at our resolve, we will be entertained by less and less impressive things. We will lose our critical edge, our love for language, our cultural depth.

There are still many shows that challenge us, but they may not all have the viewership that Colbert is building in his blatant (but funny) attempts at p.r. I won’t comment here on Colbert’s politics, because this is a blog about writing. I hope Colbert will continue to wield his pen to show viewers that words have power, that their diverse use sharpens our intellects, and that they are pleasurable to hear . . . and to read.
Posted by Julia Buckley at 12:00 AM

I'm sure you know that Colbert is a published writer--his children's book, I am a Pole--and So Can You, just came out (there are others). And I think his term "truthiness" may have made a lasting mark on political analysis.

I agree wholeheartedly that the media have been "dumbing down" their language, plots and characterization for years, which is demeaning for many viewers. Finding the "right" word is a challenge for the writer, but worrying about whether the reader will fail to understand it, or will find you the writer to be showing off and somehow putting down the reader, should not be the writer's problem.

Several years ago I was circulating the first chapter of a book in contests and to first readers. I dared to use the word "obfuscate" on the first page, and I got more criticism for that than for any other part of the chapter. (BTW, it was a group of lawyers who were doing the obfuscating--enough said?)

Great anecdote, Sheila, and very revealing. I affirm your right to use whatever word you wish, and I appreciate your willingness to challenge your audience!

I'll have to check out that children's book. :)

I'm not sure it's possible to write about lawyers without using some form of obfuscate. Isn't that what they're paid to do? :-)

Now I'll duck my head as lawyers pelt me with virtual rotten tomatoes.

Julia, good post -- thanks. I also appreciate that Colbert -- more so than Stewart, whom I also watch faithfully -- brings on as guests novelists, musicians, poets, activists, and other people looking at culture and taking creative approaches. I've learned about quite a few books from him!