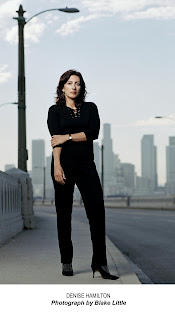 I am very pleased to welcome author Denise Hamilton to Poe’s Deadly Daughters today. Denise’s crime novels have been finalists for the Edgar, Anthony, Macavity and Willa Cather awards. She also edited Los Angeles Noir and Los Angeles Noir 2: The Classics, which spent two months on bestseller lists, won the Edgar Award for “Best Short Story” and the Southern California Independent Booksellers’ award for “Best Mystery of the Year.”

Denise’s new novel, Damage Control, will be published by Scribner on September 6. She has five books in the Eve Diamond series and a standalone book The Last Embrace, set in 1949 Hollywood.

Prior to writing novels, Denise was a Los Angeles Times staff writer. Her award-winning stories have also appeared in Wired, Cosmopolitan, Der Spiegel and New Times. She covered the collapse of Communism and was a Fulbright Scholar in Yugoslavia during the Bosnian War. Hamilton lives in the Los Angeles suburbs with her husband and two boys.

PDD: Your new novel Damage Control deals with a politician caught up in a sex and murder scandal. Did you rip that idea from the headlines?

Hamilton: LOL. If there’s one thing I learned while researching this book, it’s that politicians and sex scandals go together like bread and butter. They are always with us! Adding murder to the mix is rarer in real life – thank goodness, but it does happen. Consider the Chandra Levy murder. She was a government intern who was carrying on a secret affair with a married Congressman named Gary Condit. When Levy’s body was discovered in a wooded park, there was much speculation about whether Condit had killed her, perhaps to keep her from going public with the affair. But in the end another man was charged with her murder. But in the meantime, the revelations about their affair destroyed Condit’s career and much of his life. 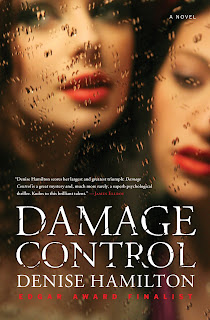 So when I was writing Damage Control, I realized that a powerful, married politician would have ample motive to kill (or order the murder of) his young mistress if she threatened to go public with an affair. And that was the genesis of Damage Control. The question is, did he do it? And can Maggie Silver, the young woman hired to run damage control on the scandal, believe what the Senator tells her? And just to make things more interesting, U.S. Senator Henry Paxton is the father of Maggie’s BFF from high school. The girls have long been estranged, but Maggie used to worship the sophisticated, cosmopolitan Paxton family. They taught her a lot about art, culture, self-esteem. And now this father figure from her youth is embroiled in a nasty sex scandal, and life is about to get very complicated for our Maggie.

Hamitlon: As an L.A. native, I’ve always had a love/hate relationship with the beach. Rats nest in the fronds of those swaying palm trees. Used hypodermic needles lurk in the sugar white sands. Sharks patrol the coastal waters. Our Golden Coast is very noir to me. But at the same time, I spent much of my childhood summers at the beach, and went to plenty of beach parties in high school, college and beyond. The pull of the surf and the salt air and the drop-dead gorgeous natural beauty is quite strong. You’d frolic on the beach all day long, then shower and put on flowing dresses and perfume and leather sandals and have barbeques and drink daquiris. It was so hedonistic and elemental. And you’d always go with your girlfriends, and there would be the lots of cute boys, and everyone was tanned and glowing and it seemed a world of infinite possibility but also lurking shadows. So in Damage Control, there are two girls – Annabelle and Maggie – and they have this crazy intense relationship, the kind you can only have in adolescence when everything is so new and raw and filled with meaning. They wear each others’ clothes and eat the same things and listen to Tori Amos obsessively and do their homework together and spend every weekend at Annabelle’s big house overlooking the Pacific, scoping out the beach parties. And then one night something unspeakably awful happens at one of those parties that will haunt their lives forever.

Fifteen years later, Maggie, now an ambitious young PR executive, walks into her firm’s conference room and sees Annabelle’s Dad standing there. Welcome to your new client, Maggie. And welcome back to the nightmare you thought you’d safely tucked away forever. Because re-connecting with the Paxton family is going to bring everything back out into the open.

PDD: Maggie’s not a lone wolf like your series character Eve Diamond. How do they differ?

Hamilton: Well, you’re right, Eve is gritty and glamorous and a bit of a smart-ass and as a reporter, she’s skeptical of everyone and everything. With Maggie Silver, I wanted to do something different. So she’s a few years older, and she’s divorced, and she owns her own home – a little bungalow in the hilly Cypress Park neighborhood northeast of Los Angeles. But the biggest difference is that Maggie’s mother lives with her. She’s a cancer survivor, and she and Maggie have a very complicated relationship. This allowed me to tell crucial parts of the story via scenes between mother and daughter and to give Maggie a sounding board when she comes home from work.

Also, unlike Eve, I wanted Maggie to have family and close emotional ties. It raises the stakes in this novel. And it also creates a lot of conflict. If you were 33 and single, would you want live with your widowed mother? Especially if she was bossy and was always trying to set you up with any available men? And if you’d nursed her through cancer, only to find that she’d started smoking again? You would love your mother, sure, but you might also be resentful, angry, annoyed. Writing those scenes was very emotional for me, because I had to feel everything that Maggie did. But I also thought it made the book very real. Many of us are dealing with aging parents these days. There are financial, housing and psychological issues at play. There can be the feeling that the child must now assume the role of the parent. I wanted to deal with all those topics, but deftly, within the context of a political thriller.

PDD: Sounds Freudian. Anything drawn from real life with your own mother?

Hamilton: Some of the emotions - sure. But the plot is pure fiction. My mother passed away earlier this year at age 90 after suffering a debilitating stroke 10 years earlier. So yes, there was rage, incomprehension, sadness, frustration. But it was directed at the universe. That’s what I tapped into.

PDD: So what’s up next for you?

Hamilton: I’ve got about three projects in the works. We’ll see what my publisher wants next. The problem is never getting the idea for the next book. It’s narrowing down all the ideas to the one that you want to spend the next year working on. But I’ll be attending Bouchercon and touring for Damage Control into October. I hope to meet lots of readers and fellow writers, that’s the fun social part from me, when I can unchain from the computer and go out into the real world. Meanwhile, if you read Damage Control, I hope you enjoy it! Thanks for the opportunity to visit Poe’s Deadly Daughters. Speaking of which, Halloween is coming up. I think it’s time to re-read The Tell-Tale Heart to my kids.

PDD: Thanks for stopping by, Denise. And good luck with the book. You can read more about it on her website http://www.denisehamilton.com/
Posted by Jeri Westerson at 4:43 AM

A great interview! Thanks for visiting, Denise. The book sounds compelling.

Denise, an interesting interview. I enjoy learning more about your intriguing new book.

Thanks so much for inviting me to guest blog. Mason, your cat icon is so adorable. I've got two felines myself and there are Maine Coon cats in Damage Control!! I think that's because I've always wanted one.

I'm so happy there is a new Denise Hamilton book coming out! The kind of news I love, lol. Thanks PDD and Ms Hamilton for making my evening.

Thanks for your kind words, Martha. I'm lucky to have readers like you!