“How long does it take to write a book?” Author's day in a fifth grade classroom

On a cloudy afternoon in November, editorial expert Chris Roerden, technical writer Pat Meller, and I pulled up to the Pilot Elementary School in Greensboro, NC. We had a date with a fifth grade class to talk about what it means to be a writer and editor. We found an eager audience whose hands started shooting up with questions before we’d finished introducing ourselves.

“How long does it take to write a book?” My “57 years to get the first one published” didn’t get as big a laugh as it does with grownups, but they were suitably impressed when Chris described the five and six year process a couple of her books required. 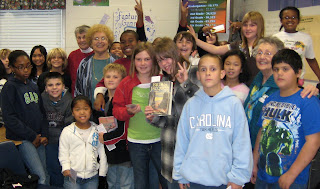 When she said she’d ghostwritten some books and Pat mentioned her research on the biology of rhesus monkeys, they had more questions.
“What does a ghostwriter do?” “Do you write about things that you already know?” “How do you find out about things you don’t know?” “When you interview someone, do you do it on a computer or in person?”

These kids have computers in their classroom, but their grasp of how things work is still under construction. “What kind of pen do you write your books with?” “How do you make more copies of a book?” “How do you get the pictures on the covers of your books?” The child who asked that one meant “How do the pictures get onto the cover?” rather than “Where do the pictures come from?” But they all liked my story about how the cover designer of Death Will Get You Sober created the shattered whiskey glass by shooting it with a gun and shooting the event with high-speed film. They were less surprised than I was when I learned it hadn’t been done on a computer. In a child’s world, as the whole afternoon reminded me, anything is possible.

Of course, these 21st century children have the common cultural preoccupations of our era. “Are you famous?” they asked. I was relieved they didn’t lose interest when we all had to say no to that one. “Have any of your books been made into movies?” They were as ready to hear that Chris’s Don’t Murder Your Mystery and Pat’s scientific and technical works had made the big screen as my murder mysteries. We had to disappoint them there too, though they liked my story about how the producer of The Mummy, Public Enemies, and Erin Brockovich thought it was a terrific read and would make a great TV series. (Alas, he doesn't do TV.)

“Have you met anybody famous?” We all had to think about that one. Oprah is famous. Kobe Bryant is famous. So is Tiger Woods. And President Obama. Writers? JK Rowling and Stephenie Meyer are famous. We hadn't met any of them. Chris Grabenstein registered, but not by name. Several of them lit up when I mentioned his Agatha- and Anthony-winning and Edgar-nominated middle-grade paranormal mystery, The Crossroads. The awards meant nothing to them--but they'd read the book. They were even more excited to hear it’s been optioned for the movies. But what really impressed them most was when I told them that before becoming a mystery writer (and also before he worked in advertising with James Patterson, who is not famous by kid standards), Chris used to do stand-up comedy with...are you ready for it? Bruce Willis.

The best moment of a memorable afternoon? It was pretty special when the kids came crowding around us clamoring for our autographs. We wrote them with a green Sharpie on bookmarks for Don't Sabotage Your Submission, scraps of paper, and notebook covers. But even better were the hugs we got from one little girl--the one who understood it when I said my book was about recovery from alcoholism, because her uncle is in a "mission" getting help.
Posted by Elizabeth Zelvin at 3:00 AM

Well-done, Elizabeth! You captured both the enthusiasm and the detail of that memorable day (memorable to us, at least, and possibly to those who will some day re-discover their Sharpie-autographed bookmarks).

Thank you for writing this piece.

I love poesdeadlydaughters.blogspot.com! Here I always find a lot of helpful information for myself. Thanks you for your work.
Webmaster of http://loveepicentre.com and http://movieszone.eu
Best regards

It doesn't take long time, we only have to use our originality and the book we creating will be so enjoyable, that's my passion I live writing and reading a lot.m10m

how long for clomid to work in men | can you buy clomid over the counter - how to get clomid without a prescription, clomid stories 2012

what time of day should i take clomid | [url=http://buycheapclomid.webs.com/#57255]cheap clomid without prescriptions[/url] - clomid where to buy, kjus on clomid when will i ovulate