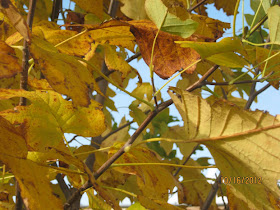 The term "Black Friday" has a long and negative history. According to my ol' pal Wikipedia, the term was first used in 1869 in the U.S. in relation to a financial crisis. Its link to the Friday after Thanksgiving first arose in the 1960s, in Philadelphia, where it was well known to buyers, merchants, and the police, the latter group because "[Black Friday] usually brings massive traffic jams and over-crowded sidewalks as the downtown stores are mobbed from opening to closing" (Wikipedia, "Black Friday.")

Even though Americans have used the term for more than 50 years, it's only in the 21st century that it has taken on even darker connotations, linking it not just to greed, but to violence and a seeming lack of compassion. The most notorious recent examples include:

2006--three incidents of Black Friday violence, including a customer assaulting another customer; a crowd of customers flooding into a Walmart and pinning employees against the merchandise; and several injuries which occurred when people tried to leap for gift certificates hanging from the ceiling.

2008--2000 shoppers outside a Walmart in Valley Stream, New York, charged into the building and trampled an employee to death. "The shoppers did not appear concerned with the victim's fate, expressing refusal to halt their stampede when other employees attempted to intervene and help the injured employee, complaining that they had been waiting in the cold and were not willing to wait any longer. Shoppers had begun assembling as early as 9:00 the evening before. Even when police arrived and attempted to render aid to the injured man, shoppers continued to pour in, shoving and pushing the officers as they made their way into the store" (Wikipedia).

2010--Six more incidents of Black Friday violence, including a man who cut in line and threatened to shoot the customers who tried to protest.

2011--a woman at a California Walmart used pepper spray on other customers, causing 20 injuries because she wanted an advantage in getting an XBox 360.

Why mention these depressing things at all? Because merchants have been pushing for an extension of the shopping nightmare into an additional Black Thursday, which would begin on Thanksgiving night.

Admittedly, not all people agree about the purpose of Thanksgiving. For some, it's a chance to be with family and to be grateful. For others, its a vague acknowledgment of a historical moment. For some, it's just a chance to eat a lot of food and watch television. But it's troubling that Thanksgiving seems to be taking a backseat to the festival of greed that the subsequent shopping season has become. And since the Thanksgiving holiday has traditionally been seen as a precursor to the Christmas holidays, one might assume that the notion of "good will to men" might apply in both circumstances.

You won't find me anywhere near a store on the Friday after Thanksgiving. And, if the statistics above have taught me anything, you CERTAINLY won't find me near a Walmart.

But maybe we should consider fostering a movement that un-does some Black Friday damage. A pay-it-forward sort of movement that encourages not just the spending of money (help out the economy, by all means), but the doing of nice things, big and small. Maybe we can start a trend of goodness that will obliterate the growing sense of remorselessness in the face of "getting stuff."

Are you on board? What would be the first nice thing you did for someone else?
Julia Buckley at 12:00 AM